That was me last weekend. well, Sunday night to be exact. it was half one in the morning and Roz woke me up with her kicks and turns as per usual. only this time the kicking and rolling went on for nearly and hour. She’d turn, nurse, kick, roll, roll back, swing her arm and hit me in the head, turn, nurse, repeat.

This went on till half two in the morning, I was fuming. I mean, hello! I had to be up in a few hours, and if she followed her usual pattern, she would be up at 5:30 tossing and turning for another half hour.

I usually leave the night light on for a bit of visibility, but for some reason, I had forgotten to do this, so when she tossed and turned and kicked again at around four, I sat her up in the dark and insisted she had a sip of water…and promptly knocked the cup over.

Boy was I raging.

Roz was sniffing and kicking during this and kicking of course so I got up to get fresh water, only for her to cry out for me. I said, a bit too sharply,

“Calm down Roz, I’m only getting you some water.”

and her sniffles turned to wails of

I went back, she kept sniffing, she fell asleep. I fumed for another good while before falling into an exhausted sleep and woke up at seven more tired than when I went to sleep.

I turned to see how my angel was and then was hit with so much guilt. Her face was smeared in blood. Her upper lip was dark with dried blood while her pyjama top had a long trail all along her sleeve to where it met her nose.

The poor poor thing was sniffling because she had been nose bleeding and I didn’t see it because the room had been pitch black. And I thought, all the mummy I’m scared could have been her telling me she was scared of the nose bleed.

I felt about as low as a snake.

She was asleep when I left the house for work but I told Krys not to be alarmed, it was just a nosebleed and she would be fine.

I spent most of Monday beating myself up about what a crap mother I was.

Thursday was a good day. I had Roz all to myself that evening, and I’ve discovered that when I have her to myself, the best way to spend my evening is to just immerse myself fully into the role of mum.

This means I’m at her beck and call. If I want to cook, I need to involve her. If I need to check facebook or emails, I need to build that time into the part of the evening where I have given her something else to do. This is usually colouring or painting or even better, play-doh.

This means I can’t obsessively pick up after her, I have to wait for the big clean up after she’s gone to bed.

You want to see what the living room looks like after a toddler bomb has gone off? here you go: 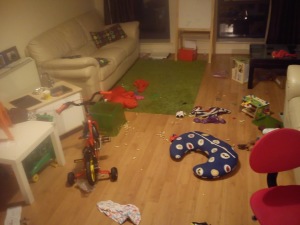 So I tend not to stress out about the home on such nights. after all, I’ll have a lifetime of cleaning homes, but only a limited time of Roz tossing handfuls of shelled groundnuts around the living room, screaming with laughter.

So Thursday night, I got home, we ate my dinner jointly, with two forks, on the carpet on teh floor with Roz telling me all about her day. Then I helped her complete a jigsaw puzzle, then she threw said groundnuts all over the room while eating some. We baked scones for the morning, on the kitchen floor so she could pour raisins and sugar and help me break an egg into the mix without making too much of a mess. Then she helped me mop the kitchen floor to get rid of said mess I was trying to avoid.

We read a story and brushed our teeth and I asked her if she wanted a drink of water before her bedtime.

I had her in her onesie (haven’t had a chance to wash her extra pair of peejays yet) and on my hip getting acup from teh cupboard when she turned and said,

“I love you too mummy”, she said with a smile.

My heart was fit to burst.

That was a good day.