Book 10 – A book featuring an extinct or imaginary creature – The Stone Sky by N.K. Jemisin 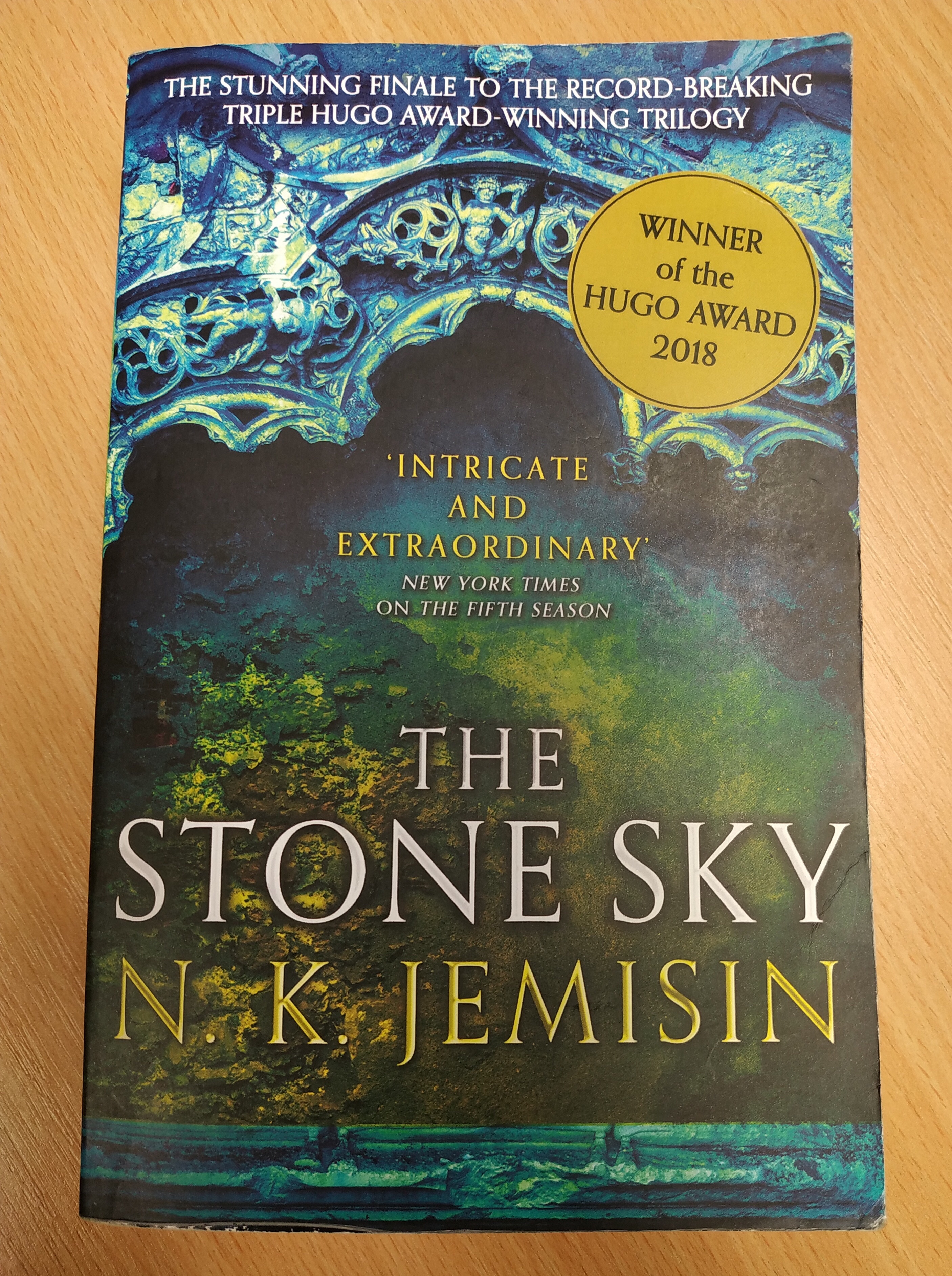 Well deserved I tell ya.

I’m also aware that I haven’t reviewed The Fifth Season, book one of the Trilogy. But that’s only because I read it in 2018 and as a result, it doesn’t really fit into the popsugar challenge for 2019. It’s definitely still an amazing book and I loved every last bit of it. So don’t read anything other than that into its exclusion here.

The moon will soon return.

Whether this heralds the destruction of humankind or something worse will depend on two women.

Essun has inherited the phenomenal power of Alabaster Tenring. With it, she hopes to find her daughter Nassun and forge a world in which every outcast child can grow up safe.

For Nassun, her mother’s mastery of the Obelisk Gate comes too late. She has seen the evil of the world, and accepted what her mother will not admit: that sometimes what is corrupt cannot be cleansed, only destroyed.

The Stone sky is the conclusion to N.K. Jemisin’s The Broken Earth trilogy. And what a finish. I was left speechless. The imaginary creatures, in this instance, are stone eaters, whom we follow more intimately in this final book as we are told more about Hoa/ Houwha and the origin and of Stone eaters. We also find out how the moon went missing and why the earth came to be called the Evil Earth.

Or I suppose you could take magical creatures to mean the humans with special powers to manipulate the earth, called Orogenes who must, in general, hide their powers from ordinary humans or risk being killed.

Once again, the world building is simply amazing. Set on a different earth called the stillness, the post apocalyptic world of the Orogenes and Stone eaters is brought to life in intimate details and large sweeps of landscapes. We’re taken to new areas and eras of the Stillness that are described in such detail that you feel you’re standing right there. Many was the time I’d lift my head up and have to readjust to the fact that I’m on a bus on our world, heading to work.

In this book, which is better paced that book two, we begin where we left off with Nassun, Essun and this time, Hoa’s personal story as the three points of view.

At its very base, the broken earth trilogy is about two things for me.

The first and being the exploitation of other people. About what happens when, generation after generation, one section of humanity uses another people they feel are lesser than them, whom they feel are less deserving of humanity, to build themselves up. How this becomes, often, the norm. How the majority build structures to ensure that those oppressed minorities stay down, stay believing they don’t deserve better, not even the basics of being allowed to live to adulthood. And when they do, are forced to hide who they are or risk death…sometimes worse. Why do some cultures believe that they need t do everything in their twisted powers to continue living in the manner to which they have become accustomed?

Hmmm… sometimes what is corrupt cannot be cleansed, only destroyed.

The second is relationships between parents and their children, and in this particular instance, between mothers and daughters. What is love? How do we perceive it? How can it be that the love of one person can prove lethal to another, or that it can be unseen, unexperienced and yet still exist in a very powerful form? How devastating is it to live without knowing that people love you? Essun is finally pulled in two directions – does she continue looking for her daughter, whom she knows is out there somewhere, or does she save the world so that her daughter can live? And Nassun, drawn to love someone who, ultimately is the reason her people have suffered for so long, yet craving love so much that yes, even that will do. Examining her mother’s past lessons in a new light, starting to know that in her own, messed up way, maybe her mother actually did love her? Maybe? How does love survive, when the first goal of that love is to teach someone how not to kill everyone else? It’s a tough read, this relationship that ends in a jagged, painful climax that, while it makes total sense and rips out your heart. I nearly cried. The relationship is so real, so relatable and so powerful. And it’s conclusion – perfect.

“I think,” Hoa says slowly, “that if you love someone, you don’t get to choose how they love you back.”

One of the biggest questions for me remained – what defines a villain, and who gets to decide who that is? One element of it is clear in Hoa’s story, and of course the guardians are just wrong, but after that, things get…complicated. Yet as the reader, you’re never forced to take a side. A rereading of the book makes you reexamine each life, each action and draw ever changing conclusions. People are complex, life is complicated and it’s just not that black and white sometimes.

Look, I’ve left loads out. Bucketloads. About the moon, about Hoa’s history lesson, about deadciv technology, the history of the guardians, it’s amazing LGBTQIA representation, it’s subtle look at shadism/colourism…lots and lots. One thing I can say is that it was an absolute pleasure to read this trilogy. It’ll be one I’ll go back to and read a bit slower next time, reading as though it’s a piece of chocolate I’m letting melt on my tongue slowly, instead of gobbling it all down before I’ve even tasted it. Savour each sentence, each description, let my heart ache when it must….

Just read it. You’ll not regret it.

Beg, borrow or ask to be gifted the trilogy from a friend, library, or family member. I purchased my book, and so can you by following this affiliate link for bookdepository Should you follow the link and buy a book, I’ll get 5% off the price of my next purchase, so give me some love if you. They provide free worldwide shipping so that’s an added bonus to their relatively low book prices.