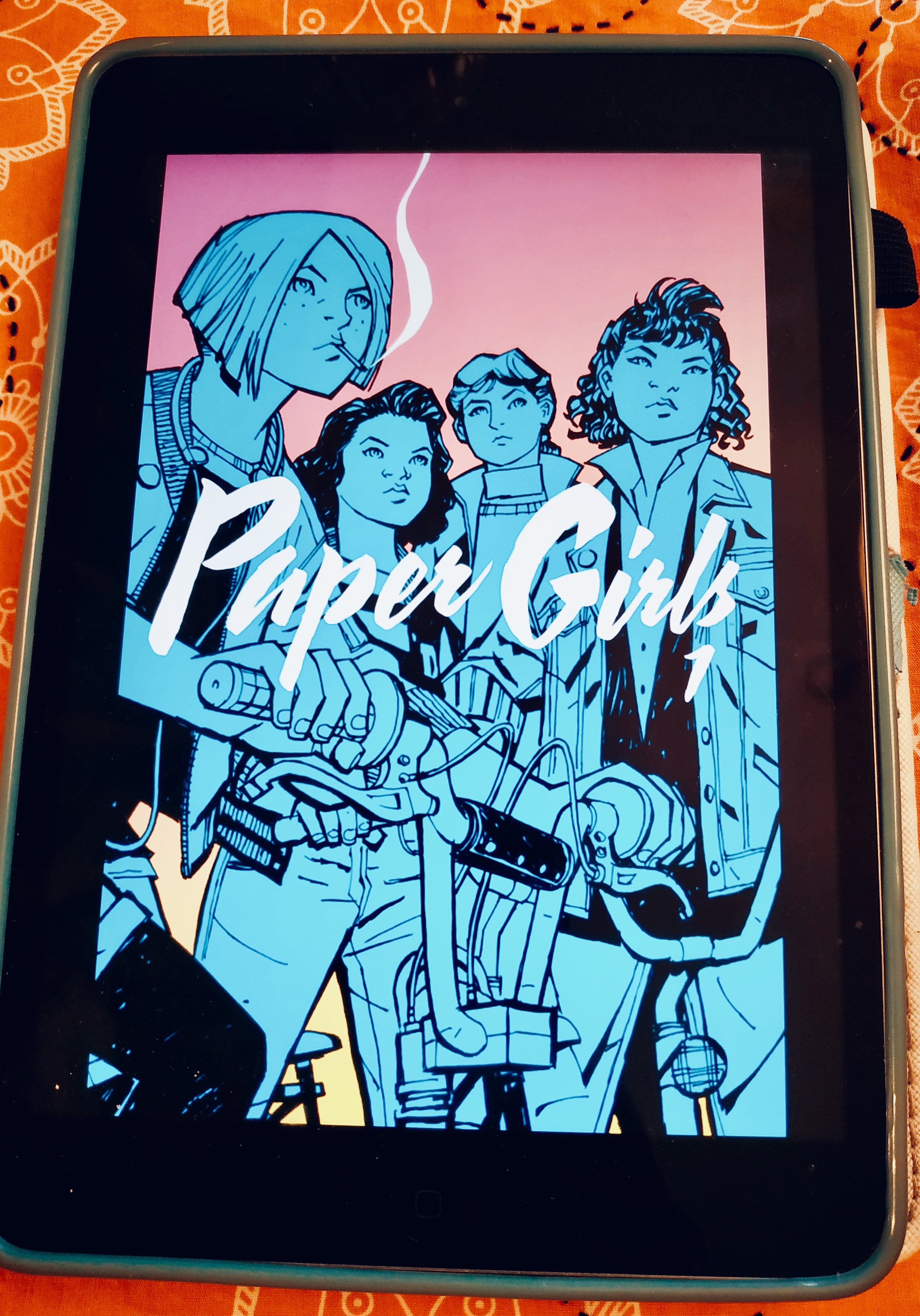 I’ve always loved comics, or graphic novels as they are known these days. While I never had access to the big Marvel and DC brands as a kid, I read a lot of Archie comics, and also read all my younger sisters’ Casper the friendly ghost, Wendy the good little witch, Richie Rich and other various ones my mum used to buy us. I still remember the excitement of going to CNA bookstore every Friday to see if a new comic was out, and devouring the whole thing again and again over the weekend.

Now that I’m all grown up and technology means I don’t have to wait weeks to catch up on backlogs, I’m loving the rediscovery of the medium.

In the early hours after Halloween of 1988, four 12-year-old newspaper delivery girls uncover the most important story of all time. Suburban drama and otherworldly mysteries collide in this smash-hit series about nostalgia, first jobs, and the last days of childhood

It’s American nostalgia that I’ve admittedly only ever seen on screen, but a really good fantasy comic. Following four twelve year old girls who have part time jobs delivering newspapers, we’re taken on an adventure through time, traveling about ten thousand years into the past, forward to the eighties, nineties, two thousands and beyond.

The comic has four main characters. Erin, who is of Asian origin, Tiffany, who has African American heritage, TJ, who has Jewish heritage and Mac who has Irish American heritage. So a somewhat diverse main cast anyway. It begins in the very early hours of Halloween morning in 1988 when Erin begins her paper route and runs into a group of teenage boys who begin to harass her, threatening both physical and sexual violence, which, while shocking as an adult, when you cast your mind back to what it was being a twelve year old girl, this is not surprising at all. (made we worried as hell for my two girls growing up in this world, but…I won’t even go there for now). The other three girls, who usually complete their routes together, come to her rescue and the teenage boys go away with a flip of the finger at the girls.

It’s a very interesting start to the book.

There are only thirty issues, so its a quick read. As always, Vaughan’s dialogue and pacing is on point. The girls all have very distinct personalities which you get to know over events that deal with exploring one’s sexuality, cancer, periods, violence, meeting one’s future self and other consequences of time travel. There seemed to be something going on in the letters section but to be honest, I couldn’t be arsed reading them. I probably missed out on lots of subtext because of that but whatever. I’m choosing to move on. Chiang’s artwork is solid as F. And I was grateful that the same artist did all 30 issues so there’s consistency there in the look and feel of the characters, and the worlds. If you’ve read comics where artist keep changing, you’ll know what I mean. ( Looking at you Buffy the vampire slayer comics)The My very favourite thing was his drawing of the old woman in the future (can’t use her name because spoilers!), is simply beautiful in its detail. His use of colour denoting the different time periods, the clothing from different eras. And the cover Art! I loved it.

Overall though, this was very meh for me. I can see how, as a young adult one would be totally blown away by the story. But having read his more adult graphic novels, I can honestly say I wasn’t really feeling it. I think I’m just not young enough for it. And not American enough. For an American adult who was a teenager during the eighties, this is probably one really cool book jam packed with lots of lovely nostalgia. However, I didn’t grow up there so it left me just “meh”. It was worth reading, otherwise I wouldn’t have read all 30 issues, believe me! I liked the way it ended, though I felt a lot of threads were left unresolved. Especially TJ’s story line. That seemed to just fall a bit flat. The carving on the hill in the past timeline…no explanation. The obsession with Apple products that’s never explained…

I’d still give it a solid seven point five out of ten though, and would still recommend it.

Beg, borrow or ask to be gifted the series from a friend, library, or family member. I read mine online, but you can purchase yours (if you wish) by following this affiliate link for bookdepository. Should you follow the link and buy a book, I’ll get 5% off the price of my next purchase, so give me some love if you. They provide free worldwide shipping so that’s an added bonus to their relatively low book prices.