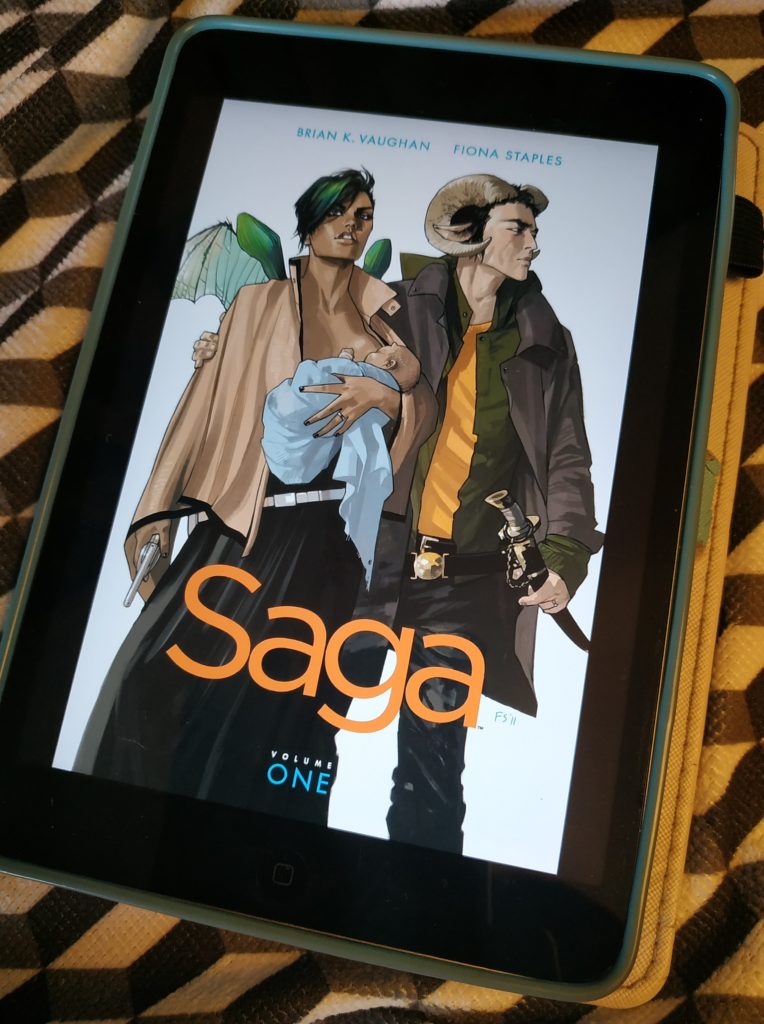 Let’s stick with Comic books, shall we? I first came across this when, looking through bookdepository for comic books I could buy for Roz, I thought,

And nearly bought it for her. Oh, what a huge mistake that would have been!

When two soldiers from opposite sides of a never-ending galactic war fall in love, they risk everything to bring a fragile new life into a dangerous old universe.

From bestselling writer Brian K. Vaughan, Saga is the sweeping tale of one young family fighting to find their place in the worlds. Fantasy and science fiction are wed like never before in this sexy, subversive drama for adults.

I suppose I could have also put this under a book set in space, but primarily, this is a book about family. About a family that has to overcome so much in order to be together, yet stay together (more or less) throughout and deal with a lot of issues in between. It’s a very, very adult book, so don’t be fooled by the innocent looking covers. The concept, physical violence, graphic sex, language are all very adult in nature and are NOT suitable for children.

But omigod I cannot emphasise how good this is. If you haven’t read it yet, do because you don’t even know what you’re missing.

So, it follows Alana and Marko, who fall in love. Only problem is, their races have been fighting an ongoing war since forever. Alana’s people are technologically advanced winged beings that live on a planet, while Marko’s people are magically advanced horned beings that live on the planet’s moon. The war expanded across many worlds where allies and enemies have been formed on both sides, and innocent bystanders have perished. Alana and Marko’s love would be considered horrible and disgusting enough by the authorities, without them adding treason by having the cutest little baby.

So both sides want them wiped off the map, because what sort of galaxy would allow for the fact that love could possibly end the war? The powers that be are all about keeping the status quo of an “us vs them” war on both sides, and the fact that their two peoples can live in peace and procreate and (gulp!) find love…well, that just will not do. The two are forced to flee their planet, newborn in tow, and try to find some corner of the galaxy where they won’t be found and killed. Like, literally killed. Two assassins are sent after them the second it’s suspected that they might have had this baby. The rest of the comic is them trying to find a safe place for their family.

Now, here’s the fun part. We are taken to impossible worlds. There are  strange spider people, ghost babysitters, unicorn people, robot nations that have televisions instead of heads, whose dreams come on screen as they sleep (that would be so AWESOME by the way). Cats that can detect lies, organic tree spacecrafts, talking hyper-religious meerkats…It’s an assload of diversity and sexuality that’s drawn beautifully. The themes addressed run across drug use, sexuality, political propaganda, religion, miscarriage, the place of literature and the power of stories…it’s just an amazing book.

The artwork is brilliant and I loved each and every cover. The worlds that Fiona Staples brings to life are as visually stimulating as they are sometimes equally disgusting and disturbing. The atmosphere created by colours and sometimes the lack of colour, is just amazing. And again, grateful that she was the artist throughout the series for continuity.

At the heart of all the stories, is this tiny little family, just trying hard to stay together in a world that demands they cant even be seen together in public. It’s a wonderful story with strong storylines, told very lovingly by Alana and Marko’s daughter Hazel, who I assumed is an adult when she’s telling us the tale of her parents’ meeting and the struggles, ups and downs her parents go through.

I could go on forever about it to be honest. The one thing that got me? issue 54 is an absolute tearjerker and then when I got to the end, I read a message saying they’re taking a hiatus “for a while”. I nearly cried. I mean, the way issue 54 ends, you already want to cry because it’s just so fucking sad, and then to hear that you have no idea when the next issue will be? argh! it was painful. I’m still not okay.

But read it anyway. You won’t regret it I promise.