Book 18 – A book about someone with a superpower – Invincible by Robert Kirkman, Ryan Ottley, Bill Crabtree, Cory Walker and other artists 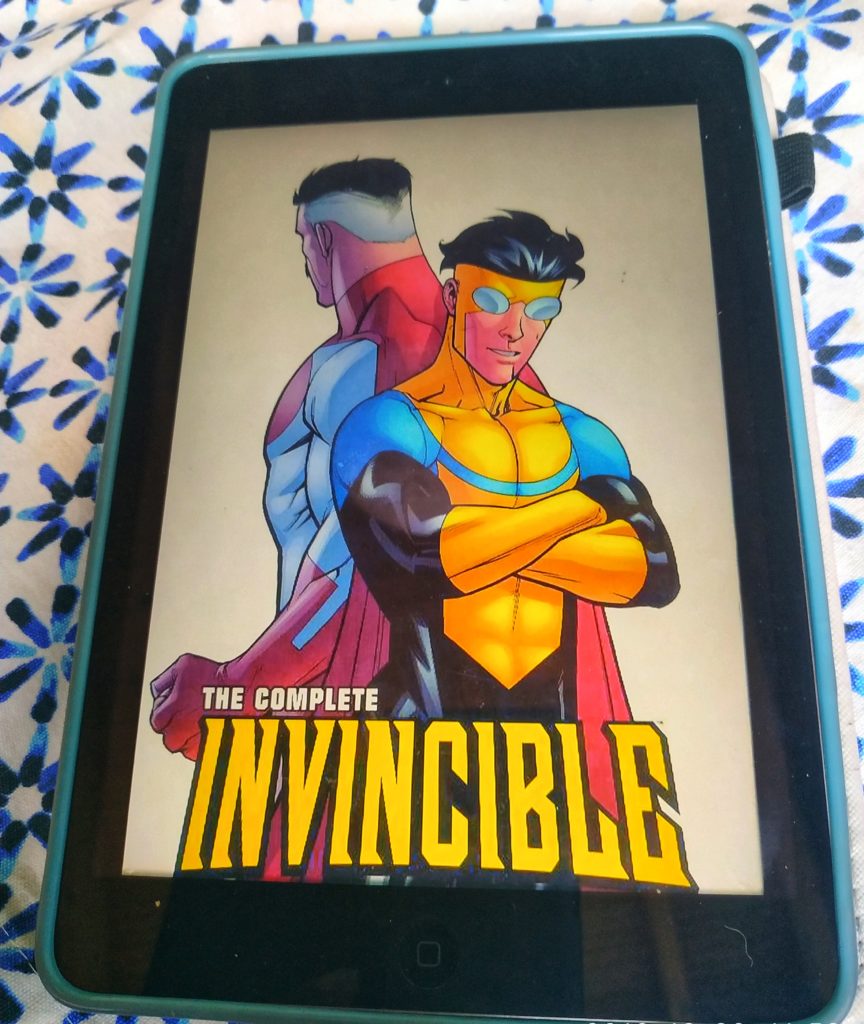 Book Blurb: Mark Grayson is just like most everyone else his age. The only major difference being that his dad is the most powerful superhero on the planet! And, Mark seems to be inheriting his father’s powers! See Mark thwart supervillains, alien invasions and all sorts of craziness, as he gets the hang of all this super-heroing stuff.

From the same writer who brought us the equally massive and wonderful The Walking Dead, I was expecting only perfection, and nearly got it.

I came across this completely by accident as I was looking for something super hero-ey to fill the gap between books. This is not DC or Marvel, but has very tongue in cheek references to all the major superheroes in both franchises. With one hundred and forty four issues, it was a very lengthy but worthwhile read.

What I liked most about it is that it’s very relatable at a base level. It follows the Grayson Family: Nolan Grayson who’s actually Omni-man in the superhero world, Debbie Grayson his human wife, and their son Mark Grayson, who eventually becomes the superhero Invincible. You find this out in about two pages of the book, so no spoiler there. They live in a normal house, Nolan works as a writer, Mark goes to school and I can’t really remember whether Debbie worked or not. sorry, it’s been a few months since I read it.

The family do normal things like eat dinner together everyday, Nolan and Mark wash dishes after Debbie cooks dinner, Mark takes out the garbage every day, it’s very very ordinary. When we start out, Nolan tells Mark history of how he came to earth and became Omni man, and that Mark will one day inherit his father’s powers.  As is traditional in superhero novels, it happens around puberty. And because his dad is already in the business, Mark doesn’t have to worry about where to get a costume, all the tips on how to be as subtle and manage his secret identity.

The first twist that turns Invincible’s life upside down is pretty cool. The comic completely pivots and becomes waaay more interesting after that, and with each story arc, Kirkman’s writing gets stronger and stronger and your jaw just drops at some of the turns that take place. I really enjoyed it. It’s very funny, very touching and as we are taken from Mark being a teenager to a man in his twenties and thirties, it’s a lovely way to see a human and superhero grow and mature into his powers and responsibilities in a world that keeps changing and threatening his existence.

The artwork though, is really amazing…bar one step where they changed artists and it was just a cartoony mess I nearly gave up. When it went back to the original animation, I nearly wept with relief. One issue that stood out is the finale battle where you just have to stop and admire the work and talent that went into it. I usually don’t even bother stopping to stare at the background but in this instance I was just gobsmacked. It was beautiful. The colours pop in every issue and the characters’ leave you in no doubt as to how they feel in each frame….bar the cartoon-ey ones I hated.

A few things things that I didn’t like, there is a rape storyline that I felt could have been handled better. Especially as it’s so unconventional. The fallout from it could have been better written, better fleshed out and really helped a lot of people out there, but I felt like they just sidestepped and wriggled out of it a bit too quickly. This being a super hero boo, you know all the women are going to be used only to drive the story along, will be hypersexualized in their super tight, very chesty costumes so leave your brain at the door and avoid thinking about it too much if you want to enjoy the story in any way.

The other thing to note is that there is a lot and I mean a LOT of violence in this. Beautifully illustrated, colour-popping violence so probably not for kids or the faint hearted.

But overall, if you love comics and you like superheros, do give this a try. I also just found out Amazon will be making an animated series coming out in 2020 so I am really excited about that and hope, as with The boys, they at least make enough changes that it becomes a good thing to watch even though you’re not a straight guy who loves his superheroes super strong and his superhero women big chested and pouty.