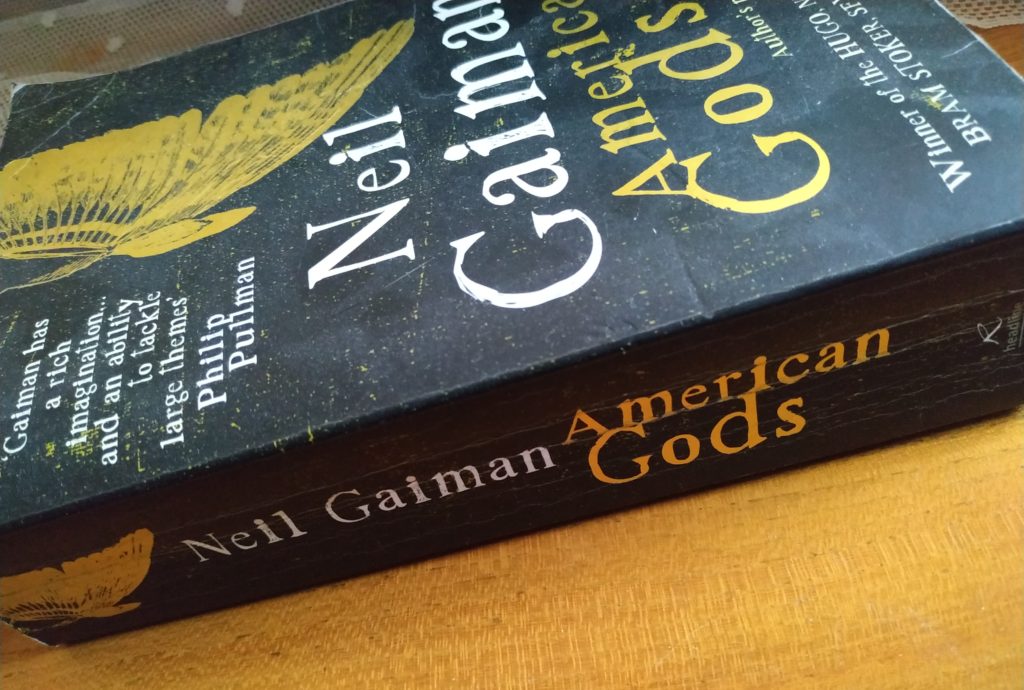 Argh! I really want to love Neil Gaiman’s work. I really do. He sounds like someone I should enjoy reading, but I just find him okay. I’m watching the series based on the novel, and Stardust is one of my favourite fantasy romance movies, but I just….*bites knuckles in frustration*. Maybe I should try other writings of his?

Book Blurb: Is nothing sacred? Days before his release from prison, Shadow’s wife, Laura, dies in a mysterious car crash. Numbly, he makes his way back home. On the plane, he encounters the enigmatic Mr Wednesday, who claims to be a refugee from a distant war, a former god and the king of America.

Together they embark on a profoundly strange journey across the heart of the USA, whilst all around them a storm of preternatural and epic proportions threatens to break. Scary, gripping and deeply unsettling, American Gods takes a long, hard look into the soul of America. You’ll be surprised by what – and who – it finds there.

As I’ve mentioned, I really wanted to love this book. I’ve heard so much about Neil Gaiman (the sister loves him and says from his online persona, he comes across as a nice guy – which doesn’t hurt), I’ve had so many people recommend his writing based on the types of novels I usually read. Yet this book left me kind of flat. I don’t even know why I didn’t like it, which is equally frustrating. But I’ll try to thrash it out a bit.

Let’s see, I think most of the problem is that Gaiman is a bit too economical with his words. Why use ten words when you can use one, kind of writing, so there’s not a lot of description going on. I also found this meant that his characters are equally economised (is that a word?) to the point where I’m not sure I really got to know them. And this version of the book I was reading is 12,000 words longer than the original printed version so I don’t even know what to say about that. The main character, Shadow, is okay. He doesn’t say much and I felt that I didn’t get to know who he was as a person, what his motivations are, why he does the things he does. Even though he’s the main character, nothing inspires me to understand him. I’m not pulled in by who he is at all. The sacrifice he makes near the end still makes zero sense to me. Laura Moon I could take or leave. Mr Wednesday just sounded like a big bully and a very one dimensional one at that.

Argh! this was so frustrating. I actually read this months ago and just couldn’t get to grips with why I didn’t like it at all and felt so bad at having to write a less than glowing review because, you know, it’s been made into a TV series and everything.

But okay, the biggest reason I didn’t like it? Why are the “old gods” Norse? In America of all places? Why are they Yemeni and West African and Persian? How does one just overwrite the native Americans as though they didn’t have gods who should be the ACTUAL old gods? That made me mad. There’s nothing new to the idea of the more worshippers a god has, the more power they have either. You don’t even have to look far, because Terry Pratchett already did that brilliantly in Small Gods, so that wasn’t new either. It could have been a true love letter to the United States, had he included mythology surrounding the first nations. That I’d have loved to see. In fact, I expected it just around the corner each time, but there’s only a vague blink-and-you’ll-miss-it arty piece that grabs your attention for a split second before we’re pulled back to Shadow and Wednesday.

I don’t know. I could go on forever listing the things I didn’t like about it. Things that niggled, things that didn’t sit quite right, things that didn’t have to be there (why do writers HAVE to use the n word so much? Is it because they are dying to use it and find literature an outlet? even apropos of nothing?

Okay, enough. The pro side, it was an interesting premise. could have been done better, but still. The first couple of chapters are actually really good, right till after Laura’s funeral, then it all goes south. Umm…with more description, it could have been a better book. With less faffing around trying to be artsy, it could be a good book?

I feel mean, but he’s a millionaire, he can take it. Many people love the book, so whatever. I don’t know that I’ll pick up another Gaiman again to be honest.

I borrowed my copy from my sister, who ADORES Neil Gaiman and will probably kill me when she reads this review. But, if you want to buy a copy, follow this affiliate link for bookdepository.com if you do, and buy a book, I’ll get 5% off the price of my next purchase, so give me some love if you do buy a book from them. They provide free worldwide shipping so that’s an added bonus to their relatively low book prices. Or maybe it’s in your library, or a friend has it. either way, read it.
Till next time,
M