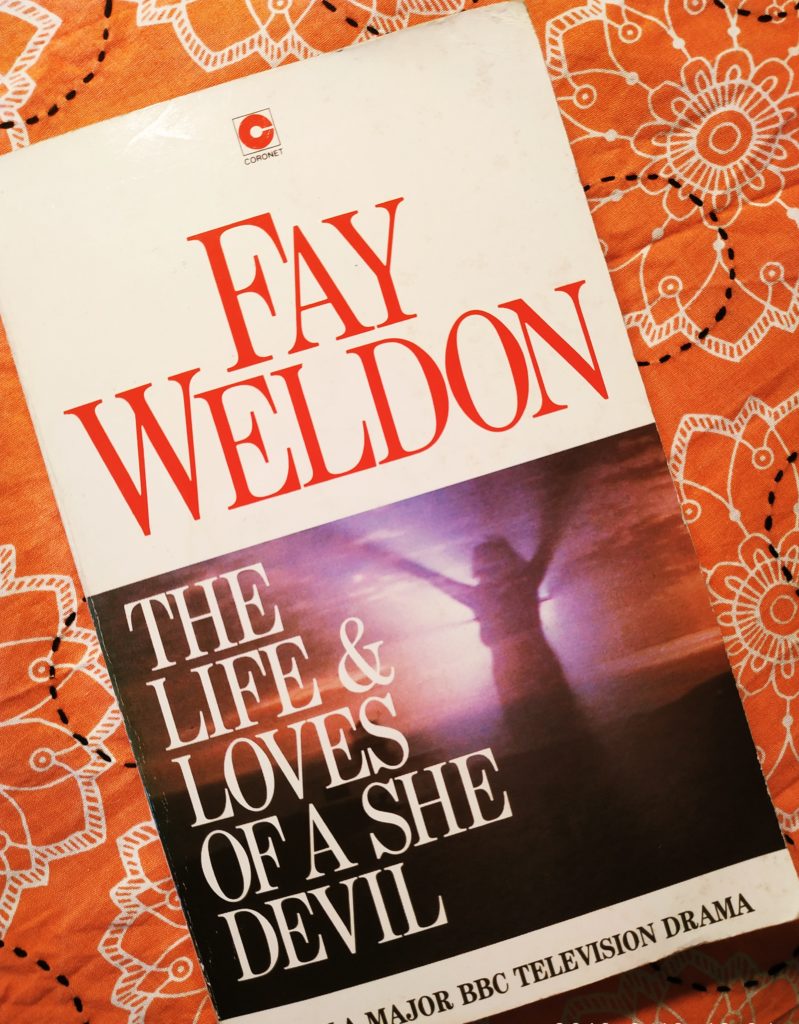 Fay Weldon was, at the age of fifteen (ish – it may have been fourteen), my first introduction to feminist writing. I read many of her books in rapid succession at the time, starting with this one – The lives and loves of a she-devil, The cloning of Joana may, Affliction, splitting, and Praxis, which was the sum total of all the Fay Weldon books available in the city library at the time.

The Lives and loves of a she-devil was my favourite just because it was delightfully unapologetic, wicked and gave me a thrill at just how heartless and cruel women could be, how we didn’t really need men to become whatever we wanted, that sex could be used just as a means to an end as men used it, and so many other lessons.

What can a woman do when her husband accuses her of being a ‘She-devil’ and leaves her for another woman? Especially if that woman is six foot two, has a jutting jaw, a hooked nose and moles on her chin. And her rival is petite, ultra-feminine and a successful novelist…

The book is told from two points of view. Some chapters are in the third person narrative, telling us the story of Ruth, described as a large, ugly woman married to the beautiful golden haired Bobo, mother or two and reluctant owner of one dog, one cat and one hamster.

I’ve always liked Fay Weldon’s writing style. She cuts away a lot of unnecessary description and goes right for the story and the emotions is a very clean, easy to read uncomplicated way. I know I bitched a lot about Neil Gaiman’s to the point writing, but this isn’t the same. Here, you get a story not trying to be clever, instead, she just tries to tell you the story without bogging you down with unnecessary details.

What I like most about Fay Weldon’s writing is that no one is either good or bad. The women are terrible to each other, and the men are absolute trash. There is not even one redeemable male character in this book and as each one is introduced, he ends up worse than the last one. It works to build the oppressive, male controlled and dominated world in which the women try to live in.

Bobbo marries Ruth because she’s pregnant and it’s practical. She’s got a good soul and she keeps his house okay and she accepts, without question, his declaration that they have an open marriage; doesn’t protest when he flirts outrageously with one of his clients and ends up going home with her (after dropping Ruth off at home) after a party; begins a passionate affair with said client, and insists on telling Ruth all the details in order or them to be honest with each other. He’s absolute trash.

It comes to a head months later when Ruth has a dinner party for her in-laws and clumsy person that she is, drops food on the floor. Bobbo tells her she isn’t a woman at all but a she-devil. Something clicks in her mind and she decides, oh, okay, fine. If I’m a she-devil, then I can do whatever I want. Ad so begin her adventures.

She schemes and plans to get what she wants over years. She abandons people, uses them, manipulates and plays with them in a way that’s sometimes hilarious and often times slightly unsettling and in the end gets what she wants. Is she happy in the end? We’re never told explicitly whether she is. As a teen I thought the ending was brilliant. As an adult, I’m a bit more ambivalent. Happiness is different for different people. The beauty of the ending is that Ruth doesn’t need my approval. She doesn’t need me to say the journey was worthwhile, because it’s not my journey. What right do we have to say to anyone that the price they paid for their happiness is too high anyway?

I suppose the reason it was one of my favourite books still stays with me. That as a young girl growing up in a family with strong women who were defined as strong in a certain way; in a society that was very patriarchal and held straitjackets around ambitious women and told them they could only have value if they do it the way that society wants approves of; in a world where women’s sexuality was especially frowned on, the way Ruth used sex as a way of discovering who she was and what she wanted, how she wielded it as a tool of manipulation to beat people at their game…I mean…major hand clap to her. I’ll admit that it also gave me a frisson of excitement to read such an illicit and obviously adult book at the time.

Would I recommend it, definitely. Read it, tell others to read it. Discuss and dissect it and argue with them about it.

I got my book in a four-books -for-a-euro charity bargain, but f you’re now chomping at the bit to read it and don’t have time to go bargain hunting, you can either borrow it from the library, a friend/colleague, or you can purchase it by following this affiliate link for bookdepository Should you follow the link and buy a book, I’ll get 5% off the price of my next purchase, so give me some love if you. They provide free worldwide shipping so that’s an added bonus to their relatively low book prices.