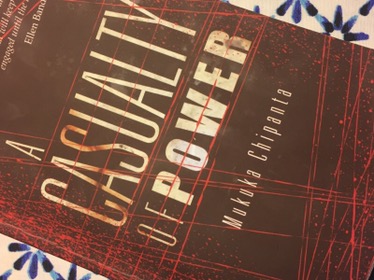 Synopsis: Hamoonga Moya’s journey would take him a long way from the township of his youth on the Zambian Copperbelt . Life in the capital brought him new friends, and new ideas, and his journalism studies introduced him to ethical dilemmas. Should we take sides when looking at the social impact of the Chinese-owned mines? Who should we blame for the impoverishment of our citizens – the new owners, or the government that made the sale? Is a stadium worth more than a hospital?

Outside the classroom, Hamoonga’s life, and his hope for the future, were soon entangled in a web of greed, international crime, and betrayal. Only in the end will he know who his true friends are.

Review: I’m making this deadline by the skin of my teeth again, so this has to change. I do have a legitimate reason this time around. In all the packing and unpacking during the move, I hadn’t a clue where I put the book and only found it two weeks ago when I finished unpacking the last of my boxes. Good news is I did find it and I did read it and I can now bring you this awesome review ON TIME. Kinda, sorta.

As a person who has done much recruiting at work, I can tell you that the million dollar question when checking references is always,

“would you hire this person again”

That’s all that you need to know sometimes and in this case, would I read it again? It would have to be a yes.

As per usual, if you haven’t yet read it, I’ll put spoiler tags so you can skip over parts of this review, and will try and keep it as spoiler free as possible.

So, What did I like about it? It’s been a long time since I read a book based in Zambia. Years and years, so there’s really something warming about reading names of institutions, roads and places that I’ve actually been in and seen and heard from Zambian people’s own mouths. That was nice.

Hamoonga, is likeable. From the moment we are introduced to him till the end, I liked him. Mukuka creates a very likeable, real character who one can relate to and empathise with easily. We’re given a very full picture of his life, which is appropriate seeing as he’s the main character.

Written in the third person, the majority of the tale is from Hamoonga’s perspective, and that works. We’re also given glimpses into other characters when the story shifts to their perspectives, and while this works for a while, I don’t know that it added much value towards the end. It’s hard to be this honest because I really did want to heap praise upon raise for the book, but I’ll stay with honesty. I think for a book this short, the shifting perspectives would have worked for fewer characters. By the time I realised some don’t add value to the story, I got irritated and lost empathy for the character involved. Had it stuck to the three or four main protagonists, it would have worked really well. As it is, at one point I couldn’t tell whose perspective we were viewing. The action seemed to shift from that of the narrator, which jarred me a bit.

But again, each perspective was realistic and believable so it wasn’t wasted.

I’m speaking specifically of the scene in chapter 14 when the workers and supervisors are gathered after the elevator nearly kills a group of miners, on page 153.

“You’re right, they care nothing for us!”Shouted one of the workers from Jinan’s team. I had assumed we were in a space from Jinan’s viewpoint so this left me a bit lost until I realised it was the voice of the narrator.

The language used was also something I noticed. It was lovely reading the urban speak that’s still very prevalent in Zambian youth who want to identify with what they perceive as cool American hip-hop culture with words like exsay and bruh peppered throughout the college years of Hamoonga’s journey, the language of college students in Zambia emanating from Hamoonga’s ethics group, brought a smile to my face as I remembered my own college days. The local languages sprinkled throughout with awe shuwa, yali balansa and the like. Just lovely for a Zambian to read. However, there were a few instances where terms used left me lost as they certainly weren’t terms I ever heard growing up. Like switch, for stick, or high school instead of secondary school. Additionally, there are descriptions of people and distances based on the imperial system, which isn’t the done thing in Zambia as we’ve had the metric system for a very long time. over thirty years now, so the use of miles, feet, yards didn’t work for me. I know that writers sometimes have to use terms based on where they hope their books will have an audience so this might have been the case. But later in the book we have robots, which is such an endearing way to say traffic lights, that I felt using local terms and then adding them to the very handy glossary at the back of the book, would have been better.

How real was the book? Very. It made for uncomfortable reading as we all know how power corrupts and absolute power corrupts absolutely. And in, unfortunately and alarmingly, the events described in the book could very easily happen in Zambia where power goes unchecked. When one of the characters states,

I had lie down and just stare into space for a moment and let all the feels in. All the feels. We really don’t know how powerful we can be if we could only muster the courage to stand together, as people, anywhere in the world. Especially given the state of the world at present.

The question of China’s investment in Zambia and indeed their continuing investment in the continent as a whole will always be a contentious topic. I agree with Hamoonga and his friends’ arguments that endless roads and stadiums add nothing concrete to the welfare of the Zambian people and is very little payment for the lives being lost, the respiratory illnesses increasing alarmingly in mine towns, pollution of rivers and zero enforcement of health and safety for the workers. And while we can blame the chinese investors for lack of ethical practices, it’s up to the Zambian government to look after it’s people’s interests and resist the dazzle of a few dollars for the long term welfare of the whole country. And Zambian people need to come to a point where we realise government must work for the people and only we can cause this change – peacefully but forcefully, if we are willing to. I could go on all day about that one.

I was a little disappointed with the ending of chapter eighteen and the whole of the way chapter nineteen was written. These are pivotal bits to the story and I felt cheated.

I felt the way we are introduced to the secret agent was a bit rushed. Okay, a lot rushed. And far too abrupt. I think had we discovered who it was as Hamoonga discovered it, it would have been perfect. page 186 and 187 were totally unnecessary. The element of surprise was then gone. And the issue I had with chapter nineteen was the time jumps. I’m not sure were Jinan and the other four released the next day? then we jump back to Hamoonga the night before, then back to the present again with the minister..it didn’t work for me.

I would have let it run chronologically and left the reveal of the betrayal when Hamoonga sees Mr Miti in the car after he’s already kind of worked out who gave them away.

So yes, I would read it again. Yes I would recommend it and do throw some love over to a fellow Zambian and buy his book.

I got my copy from www.bookdepository.com. This is an affiliate link  so just for transparency, if you follow that link, I’ll get a few cents thrown my way off my next book purchase in this 2017 challenge. It’s free shipping worldwide so what have you got to lose eh? 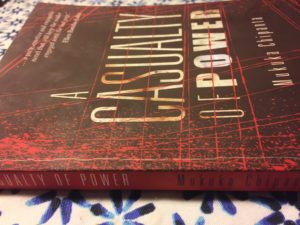 p.s. I’ve been typing this in bed next to small girl and she’s woken up so many times that I’ve missed my February deadline. That’ll learn me to fly by the seat of my pants.