Book Review: Children of blood and bone by Tomi Adeyemi 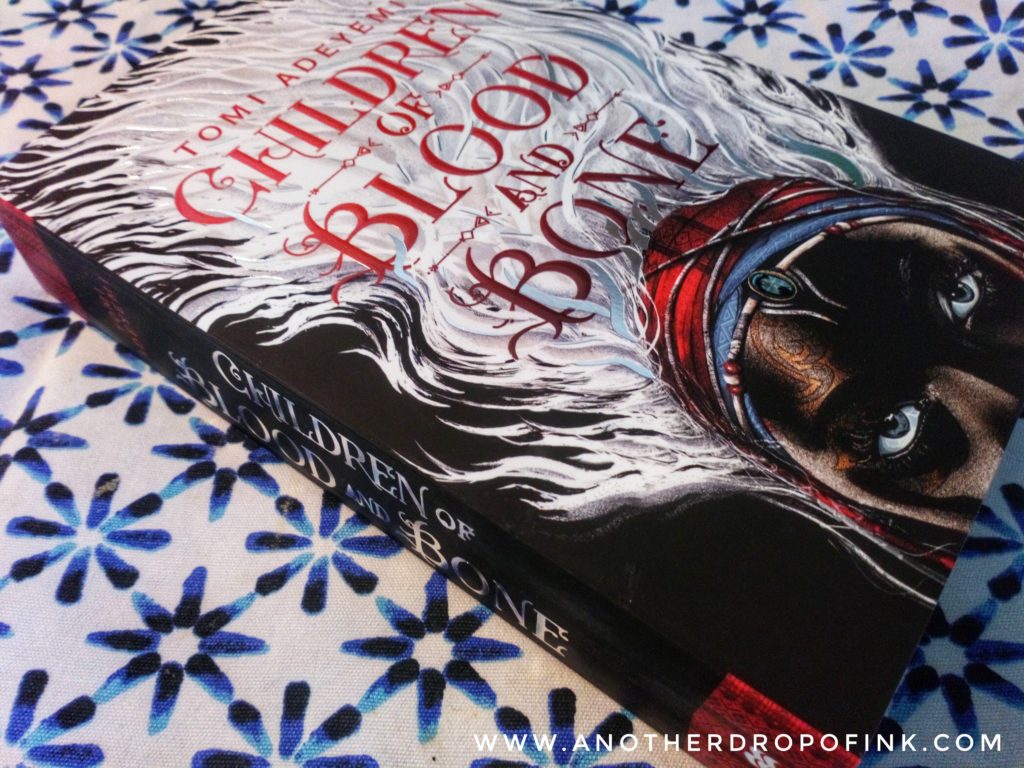 So I’m back writing…finally, and hopefully on a more continuous basis. And what better way to start than with a book review? Well, here goes…

They killed my mother.

They took our magic.

They tried to bury us.

But everything changed the night magic disappeared. Under the orders of the ruthless king, anyone with powers was targeted and killed, leaving Zelie without a mother and her people without hope. Only a few people remain with the power to use magic, and they must stay hidden.

Zelie is one such person. Now she has a chance to bring back magic to her people strike against the monarchy. With the help of a rogue princess, Zelie must learn to harness her powers and outrun the crown prince, who is hell-bent on eradicating magic for good.

Danger lurks in Orisha, where strange creatures prowl, and vengeful spirits wait in the waters. Yet the greatest danger may be Zelie herself as she struggles to come to terms with the strength of her magic – and her growing feelings for an enemy.

Set in the fictitious West African island nation of Orisha, it centres on a teenage girl called Zelie who, as the synopsis says, is struggling to cope in a world where her mother was murdered by a ruthless king, and she lives in constant fear because of who she is.  From the start, it’s easy to identify with Zelie. Her character is written well, she is full of teenage angst, and a view of the world as black and white, which sets you up to know that it will develop various shades of grey before the book is done, and that this will be Zelie’s journey.

Written in the first person, we are given a view from the four main characters. Zelie, her brother Tzain, rogue royal Amari and her brother the crown prince, Inan. It’s a well written book that flows well and, if I were 15 and reading this, I would be absolutely gripped. It’s the first YA fantasy I’ve ever read that has an all black cast and that was fascinating in itself. I’ve lived a pretty long time on this earth and read a great many books, never mind fantasy books, and this is the first time I’ve read a fantasy book with an all black cast. You know me an my harping on about representation mattering, so this is huge. There are probably a thousand other writers of all black fantasy books rolling their eyes right now. I’ll apologise in advance, but yes, this is the first one I’ve ever read.  The pace is good, even though the story is predictable in parts, it still draws you to find out what happens and the message it has is not lost. That how do you survive in a world where other want you dead. Where people, your people, are dying every day and you have to live in it. This of course parallels what is happening in the world around us at present, with people taking opposing extreme political views but unwilling to really face the people that suffer and die in front of them. That while violence can exist on both sides of the equation, sometimes you have to take away nuance and look at who holds the power and uses it over years, to bring others down.

I really don’t like writing bad things about books I enjoyed reading, and I’m really sorry if Tomi Adeyemi ever reads this, so sorry because it’s a wonderful book (hides head in shame because I’ve never written a WHOLE BOOK myself so, judgy much?). A few things I didn’t like about the book. The emphasis on skin colour. I didn’t like it at all. I’m still wondering what it added to the story beside shadism of the lighter skinned people being predominantly revered while darker skinned people are down trodden and seen as lesser than. Plus, if it’s a book set in an African state, we don’t need this emphasis on copper skinned and almond skinned and night skinned and charcoal skinned whatever. I also had serious Avatar: The last air bender vibes and tended to read Inan’s chapters in the voice of prince Zuko because the parallels with the two characters, and the arc Inan was inevitably going to take, were too similar to ignore. I also didn’t like the forced romantic stories. They seemed forced and came a little out of nowhere. They didn’t seem believable to me. Maybe they would to the audience they were intended for though. It’s a long time since you’d describe me as a Young Adult, (chortle,chortle,chortle) so perhaps I’m just the wrong age category for that particular arc. Regardless, the theme of redemption by love is a lot flawed when we tell boys that the love of a good, physically attractive woman will make them better people, and it’s even more concerning when we imply to young girls that they can change a person by loving them. The other notion I didn’t like was the idea that girls pass from the protection of their fathers to that of their brothers, that women are in some way to be protected and untrusted with their own sexualitywas a bit…that didn’t sit well with me at all. That’s not the type of society I want my girls to grow up in, and it’s prevalent everywhere because this world has been one big man’s world for thousands of years. I would have hoped that in fantasy, we can show something different.  So those are my gripes with the book.

But overall, yes, I would read it again. I would recommend it to anyone and everyone. I liked it. It ends on a bit of a cliffhanger, but to be honest, one could happily close the book, never read the sequel, and conclude that this was a nice little self contained story, which it is. Most of the story lines are tied up, the characters grow and reach enough climactic ends that one can be satisfied with the outcomes while left with a small curiosity as to what will happen next to them and the land, without the frustration of wanting to fling the book at the wall in frustration. In fact, had I not found out, ten pages to the end, that there was a follow up book, I would have been just as happy with the ending.

One final point, the cover art is absolutely stunning.

And the news that the movie of the book is already in production fills me with a warm glow. Children of blood and bone is the first in the Orisha trilogy, and book two, children of virtue and vengeance, will be out in March 2019. I am really looking forward to it.

Now, I bought the book on bookdepository.com  and that there is an affiliate link, meaning if you follow the link and you buy a book, I’ll get 5% off the price of my next purchase, so give me some love if you do buy a book from them. Free worldwide shipping too.