I’ve been on Maternity leave now for four months, and one of the things I miss most is the walk from my bus stop to the office. It gave me my daily first burst of exercise, and also made me look up at the sky, around me, at other people, and really appreciate the value of being alive and well. One of the hardest parts of my day though, was walking past homeless people. There was especially, one man I walked past every morning for the last four years, who broke my heart. Rain or shine, freezing and hot, he was out in all weather, at the same spot, visible, seen and homeless.

You’d have to be living under a rock somewhere in Ireland, not to know that we currently have a homelessness crisis. From people sleeping out on the streets, people spending months on end in emergency shelters, Hotels, B&Bs, sleeping on friends’ couches, in their cars, with family, with strangers….it cannot remain hidden much longer.

I often think what is the impact on people, living like this year in and year out, not having a key to a place you can call home? What about the children to whom, this is now becoming normal? I can’t imagine what it’s like to be a parent under those conditions; to try and provide stability when you can’t promise it long term.

With winter here, and the days turning colder, Focus Ireland are highlighting the fact that there are currently over 2,400 children and nearly 1200 families are  homeless nationwide.

Their new campaign aims to highlight the ever growing problem of homelessness and its terrible impact on children. Founder and life president Sr Stan had this to say,

“I know from meeting families who are homeless that we support it’s the children who feel it the worst. Many times a family who are homeless are often squeezed into one hotel room – 3 or 4 people in one room, nowhere to cook or for children to play. There are also many single people and couples homeless and they all need a place to call home.” 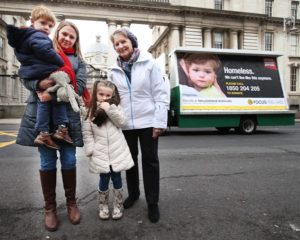 Sinead Compton co-director of fundraising Focus Ireland with her two children Arron and Meabh with Sr Stan as they launch the charity’s urgent Christmas appeal.

Sr. Stan highlighted the vital role Focus Ireland’s lifeline services play in supporting people as Focus Ireland reported that its family team services have supported   230 families and just under 450 children in Dublin to secure a home and escape from the trauma of homelessness in the first 10 months of this year *. The charity also supports hundreds of families who are still homeless and  living in hotels and b&bs.

One mother, Gillian who was homeless but has now secured a home with support of Focus Ireland said,

“When you have a home you don’t realise how lucky you are…. my daughter was only two weeks old when we became homeless,  I don’t think I’d even be here now if it wasn’t for Focus Ireland,  I wake up every day now and  think ‘I have a home,”

Those words made me tear up. I cannot imagine what it’s like to have to parent a newborn, with nowhere to call my own, to be unable to build my own “nest” and enjoy that period with nothing more than the usual endless new baby worries to deal with.

So here’s where you come in. Focus Ireland do great work, but they can’t do it with only government funds. The rising demand means those resources are not enough. Any donation at all will help them provide direct support (89 cents of every euro donated goes directly to services) for families and single people currently homeless and those at risk of becoming homeless.

( * In partnership with the Dublin Region Homeless Executive and local authorities)

This post is part of a Blog March by members of the Irish Parenting Bloggers network, to raise awareness of homelessness and Focus Ireland’s campaign. You can read more posts oby following the hashtag #FocusOnChristmas on social media. Thank you.