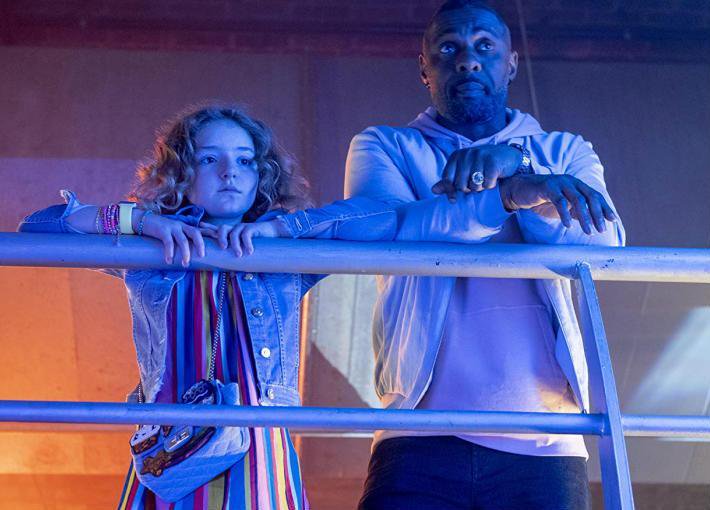 Turn Up Charlie is an eight part comedy starring Idris Elba as DJ Charlie Ayo who, once upon a time had a one hit wonder but that was in the very, very distant past. He now lives with his aunt Lydia (Jocelyn Jee Esien), pretending to his parents back in Nigeria that he’s a big deal in a successful record company and that he’s still engaged to the wonderful woman they adore.

Charlie is broke, so when he’s offered the job of nanny to Gabrielle he takes it on reluctantly and the rest of the series is based on their adventures and misadventures. This is not a hilarious, slap your knee funny comedy. Well, at least I didn’t find it to be, but it does give you a different side to Idris Elba. As with any good actor, you forget that he’s the famous much talked about actor, and you only see Charlie Ayo on the screen. He’s funny, charming, and completely believable as this washed up has-been with pretty much nothing to lose by taking on this job. Seriously, he carries the whole thing, which is a shame because it’s not great. watchable yes, great, no. By the way, he’d make an AMAZING Bond. AMAZING. He just oozes charm. The cheese factor is high when he says “I’m adorbs” and hey, can’t you just see James Bond saying that with a cheeky wink and a smile? And he’s taaaallllll. So tall. Like you can tell he’s tall when he’s just standing alone in a shot, he’s that tall. And did I mention fit? well fit…and also….okay, his isn’t a post about Idris Elba. Is there a vote somewhere where we can vote him in as The Next Bond? Because I’m so there.

Back to the series.

Of course it’s predictable in parts. Gabrielle is the the sassy, know it all, bratty, potty-mouthed spoilt little preteen with all the psychotherapy buzzwords and social media speak, while Charlie is the bumbling dinosaur who doesn’t have a clue and shows her the real world that her parents never will (Camden market for off the rack separates instead of upmarket boutiques where they serve one tea as one tries on various items of clothing – say that in a ultra posh Downton Abbey), infusing wisdom along the way….well, wisdom is debatable. Of course her parents pay her no attention at all, and of course Charlie is hoping the famous DJ mum will somehow rub off on his dead in the water career. Of course, of course, of course. But it’s a great reminder of the versatility of Idris Elba, who is an actual DJ in real life, famous enough that he’s playing Coachella this year, so we get a bit of a glimpse into his other working life and are reminder just how talented this man is throughout.

Jocelyn Jee Esien give the only laugh out loud moments as Aunt Lydia, and who thought, after The Handmaid’s Tale, that the name Aunt Lydia would inspire any kind of laughter, right? Inappropriate and endearing in equal parts, she’s underused but funny, which can also be said for Charlie’s stoner buddy Del (Guz Khan). Both characters are used more to move the plot along than for us to actually give us an insight into the real relationships Charlie has, and has sustained throughout this time. Like instead of showing us what a nice, standup guy he is in his interaction with his new friends, why not show us that with his current friends and the family that’s there for him the whole time? It would make more sense. Instead, we’re teased with these two very important people in his life, and the last scene we see Del in had me frustrated and watching to throw something at the television. It just didn’t make any sense, the way things were left. especially given the kind of guy we get to now Charlie to be.

One major criticism I had with the show is that it’s heavy on the ‘poor people are funny and warm and wise versus rich people are vapid, dry and neurotic’ stereotypes. Also, you can count the number of people of colour there are. I didn’t get that aspect of it. Surely this is mostly about Charlie, so why are we spending soooo much time in a world that belongs to David. Is this what Charlie is aspiring to be, or is he aspiring to be a DJ? Is that where DJs are famous? I’m not a great music person so maybe I’m just out of touch somehow but it jarred a…..tad. Other than that, it’s watchable. The season finale is enough to leave you either happy enough that you watched season one and you can leave it there, or enough for you to wonder what will happen to Charlie , Gabrielle, Del, and Sara (not so much David to be honest) in season two.

As I mentioned already, don’t expect huge belly laugh….maybe a giggle or two, but at less than 30 minutes per episode, it’s only about four hours of your life that you’re not really doing much with anyway so what’s there to lose, right?