Our trip to the cinema 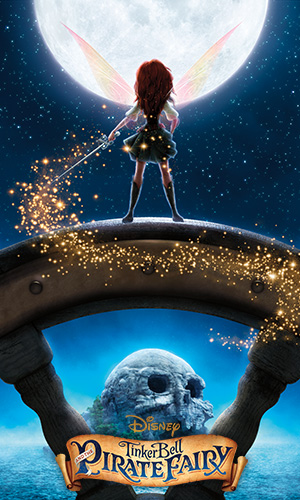 I would like to say I took Roz on her first trip to the cinema, but alas, her dad robbed me of the pleasure. See, this is why you should be very clear and very precise when you speak to anyone, and not assume they can read minds.
Three weeks ago I told Krys that Roz and I would be going to see Tinkerbell and the pirate fairy in the cinema. As part of the Irish parenting bloggers, the invitation had been extended for members to go to a preview screening so I thought, why not. After looking at a trailer online, I thought it looked like an okay movie so I said it to him during a broader discussion about things-to-do-with-the-child-when-it-is-raining, and how several  mums I chat to on Facebook have been taking their kids (who are around Roz’s age) to the cinema for yonks now while it never really crossed my mind.
Roz loves pirates and loves a good movie and has never been to the cinema, and we could make it a girls’ day out of a Saturday.
Well, next thing I know, I come home on the 1stFebruary to,
“Mummy we went to the cinema to see a movie with daddy”.
Sigh.
So that was my 8th February ruined. RUINED!!
Of course I jest.
No actually I don’t. he’s not been forgiven yet.
It didn’t make a blind bit of difference if they had gone to see twenty movies before the 8th February. Truth is Rozalia lie to watch tings. Be it on YouTube, a cartoon, music video, you name it, and she’ll watch it.
So we went to the cinema the next Saturday for an advance screening of Tinkerbell and she loved it! It was screened in 3D and she was given glasses but for a kid who wears her sunglasses all the time in the summer, the novelty of the 3D glasses wore off about ten seconds in. No matter how much I tried, she was very, very sure that she did not want to wear the glasses so I left her to it.
I must say that despite my reservations, I quite enjoyed it as well. I liked the links the movie made to Peter Pan because that was one of my favourite stories growing up and My sister told me that my nine year old nephew (who came with us to the cinema) started re-reading Peter Pan the second he got home. She adored the pirates, which was typical. At one stage she leaned over and said,
“Mummy I wish I could just go inside the movie and catch the pirates and put them all in jail!”
Well, you go girl!
And at another stage she let out the most forlorn sigh and said,
“I wish I could fly too!”
Honey, don’t we all?
She hasn’t stopped talking about it. All the way home on the bus her dad was regaled with tales of the pirates and the fairies and the possibility of flying.

Edited to add a disclosure: We received an invitation to the advance screening from Disney, but I was not paid  to promote the film.