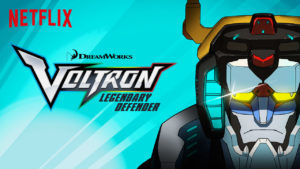 I haven’t done a Netflix post in a long while because for a long while, I was snowed under with college work, but I’m back now to my usual bingeing self. And while most of the children’s shows I watch on Netflix are to screen suitability for Roz, this month, I’m watching a cartoon because I just plain love it.

Anyone who was a child, or teenager in the eighties has to remember this series. At least anyone who was a child in Zambia in the late eighties should remember it because it aired a lot. I vaguely remember it being about some kind of robotic cars (?) in the shape of lions, ridden by teenagers (?) that would join up together to form Voltron, a super robot of some kind. Two of the lions were the legs, another two the arms and the  fifth one the head and torso? or something like that?

Each lion was a different colour and they used to fight against evil forces or something. When the danger got too great, they would team up and form Voltron. Voltron was this huge Robot that had a giant sword and kicked some serious butt. There was a girl on the Voltron team who was the pink Lion? Or at least wore pink armour, and she was my favourite. And there was a child, which made it feel all inclusive to this not-teenager at the time. I don’t remember most of the story line, in fairness I was eleven years old when the eighties ended, but I do remember the name of the show and loving it. Luckily they had mass reruns on national television so I got to watch it often at teh time.

So when I read that Netflix were resurrecting the series in conjunction with Dreamworks animation….hello! Why wouldn’t I watch it? Not only would I be granted a trip into the past, but I love the Netflix children’s series which are yet to disappoint. 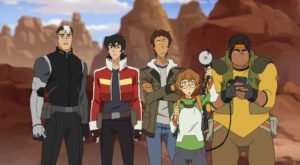 The complete series was released on Netflix on the 10th June, and the first episode is a 1 hour special while the remaining ten episodes are standard twenty-three minutes, so not too long. I’d say personally, the show is great for nine year olds upwards and teenagers especially will love it as it’s the same animation team that worked on The Legend of Korra behind this, so it’s no expenses spared. And who doesn’t love animation? I was relieved as I thought it would be CGI, which would have taken away from the original series and made this tacky.  And Steven Yeun from The Walking Dead does the voice of Keith so how’s that for cool?

So I watched the first episode when it aired and I was pretty impressed. No girl in the lions and no pink outfit, but I was still impressed with my long term memory. I actually looked it up and there was a pink lion in the original 1984 series, so phew. The old memory is still good.

The first episode walks you through how Keith, Pidge, Hank, Shiro and Lance come together as a team and track down the first Lion, and then the rest of the lions across the universe. It also gives us a glimpse as to where the lions came from and what their purpose was, all the time hinting enough to reveal that there’s probably a lot more mythology around them than we know, and leaving lots of room to expand on this over the series. The first time they form Voltron is also really cool! I could never work out exactly how the lions fit together when I was a kid, so there I was watching closely (a bit of rewinding didn’t hurt) to make sure I didn’t miss it.

I can honestly say my childhood self was not disappointed with this version and I’d definitely watch more episodes. Below is a trailer just to get your interest.