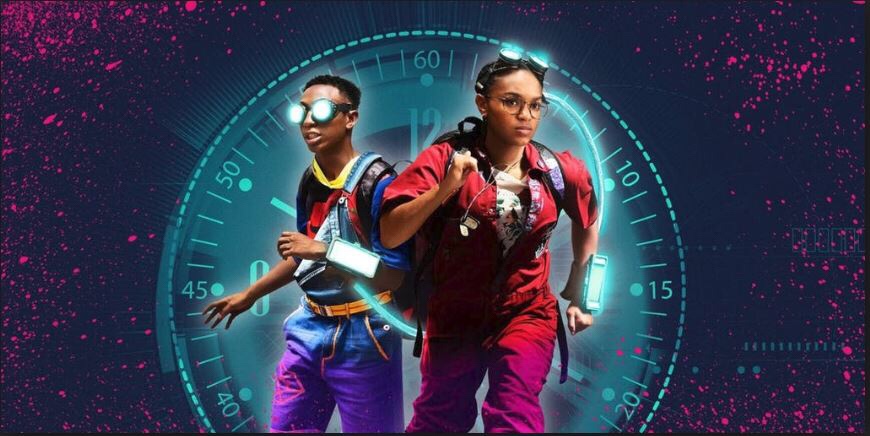 Imagine you were the first person to succeed in creating a device that allowed you to travel through time. What period of the past would you visit? Who would you like to see? What would you change, if any? Then imagine if, through a tragic turn of events, you have to go back to the same timeframe, over and over, to change something in the past because the present is too painful to live in.

Sixteen year olds, CJ (Eden Duncan-Smith) and Sebastian (Danté Crichlow) manage to work out the science behind time travel, and successfully launch their first trial run – returning to the previous day, for exactly ten minutes. We even get a cameo for Michael J Fox, which is a nice nod to Back to the Future. Do they change anything in the past? Of course they do! Because they’re teenagers and because this would be a very boring movie about time travel if they didn’t. They return to the present triumphant and you’re lulled into a “this is going to be a fun time travel movie” state until tragedy strikes when Calvin (Astro) CJ’s older brother, is fatally shot by the police.

With Sci-Fi/fantasy acting as a backdrop, this movie looks at the issue around shooting of young black men, often fatally, by police who overreact to perceived dangers under racial profiling, and living under the threat of gun violence from the police and criminals. CJ and her brother can’t even have a harmless sibling argument in the street without two police officers coming over to ensure they ‘move along’. Would time travel change these circumstances, or this world that we have created? And even if one life is changed, saved or not, would that trigger a change for the rest of society? What is destined to stay unchanged, and would we like the changes if we forced them?

The other issue the movie deals with is grief. What wouldn’t you do to bring someone you love back? From CJ, to her mother and the community, they grieve Calvin, and they try to get on with their lives but CJ can’t. With this power at her hands how can she not at least try, when there’s the slimmest chance change events. When someone dies who touched many lives, it’s a complex process. Grief becomes communal. At one point, Sebastian says of Calvin “I loved him too”. It’s a beautiful, poignant moment that captures just how much CJ, trapped in her own grief, is unable to reach out and let others in, but also captures how Sebastian has missed one very important critical element of her grief, that she also has to grieve alone. The film teaches that for us to heal as a community, we have to allow others in. But that we have to also be allowed paradoxically, to do it our own way, in order to allow that in our own time, we will turn to others and all heal.

Both heartwarming and heartbreaking, the movie switches between gritty urban and sci-fi. The characters are well developed and one gets to know enough about them to empathise with them throughout. It has some truly touching moments, especially between CJ and Calvin, that takes you from wary of him to outright crying at his fate. A few genuine good laughs are sprinkled in so that it’s not just doom and gloom, and it’s a great YA movie and for those young at heart.

The ending of the movie seems to have caused quite the division. I loved it. I think it ended exactly where it should have.

After this, a must see is When they see us, a four part telling of real live events in the same vein. And aft that, Attacj the Block, another gripping sci-fi/fantasy that stars John Boyega and is truly amazing. I can unashamedly admit to having watched it over ten times and enjoying it every single time. All three movies are currently streaming on Netflix.