The importance of black cosplay

So yesterday, we had our weekly Netflix night, when Roz and I (and now Elle)  get into our PJs by seven thirty, choose a movie or series, get some junk food and relax at the end of the week. It’s always fun. We argue over what to watch, we argue over what to eat (my adding healthy fruit salads never goes down well and then she eats the lot anyway) we argue with the cat trying to sneak food off our plates till Roz carries and tosses her outside, we argue with Elle wanting to pull food off our plates and onto the floor for exploration.

We ended up watching four episodes of She-ra.

She absolutely loved it!

I actually cannot believe this is my child saying this.

“But I have brown skin.”

My heart broke a little bit.

And now I understand even more about our world.

In my head, in an overwhelming part part of my life, I am Tonga first. Then I am Zambian. Then I’m African. Only living outside of my home continent did I suddenly become a black person. To paraphrase Lupita Nyongo, why on earth would we be sitting around in Zambia talking about being black? It just doesn’t happen in the same alien way it happens here. Even as we watch movies and shows from other countries, it never registered to me that being black was anything.

And now? Well, my daughter is living in this part of the hemisphere where she is acutely and always conscious of it. And for her, it’ll never be the same experience as I had. I can’t even dilute it in any way, because were we to up sticks and move to Zambia, she would still not be seen as the same as me. Her identity would not be defined by tribe first. And that just sucks.

So to hear her, at six years old, talking about how she feels somehow that she cannot do something as simple cosplay because of skin colour.

Yeah. I didn’t see that coming.

And perhaps in some way I should take a piece of that blame. In the three years we’ve religiously gone to comic con, I have dressed up as Michonne from The Walking Dead. It’s my lazy woman option. I adore Michonne. My heart nearly burst with panic on the last episode of Season seven. She’s seriously badass. It’s easy for me to dress up as her. She has dreadlocks, I have dreadlocks; She wears waistcoats, I have waistcoats; She loves Rick Grimes, I adore Andrew Lincoln…I could go on and on. I even got a sword this year so that I could look even more original, and I didn’t have to do anything other than find my waistcoat and put it on. She went dressed up as Moana this year because dammit she has the same hair, I think Moana is just as equally badass, and about the most rounded out, complex, fierce heroine Disney has had for kids, especially girls, in a long time. Scratch that, ever. But…and it’s only a small butt. Moana has the same skin colour as Roz. She has the same hair as Roz. And again, it didn’t take much for her to very loosely cosplay the character. That we couldn’t find a paddle was our biggest bugbear. 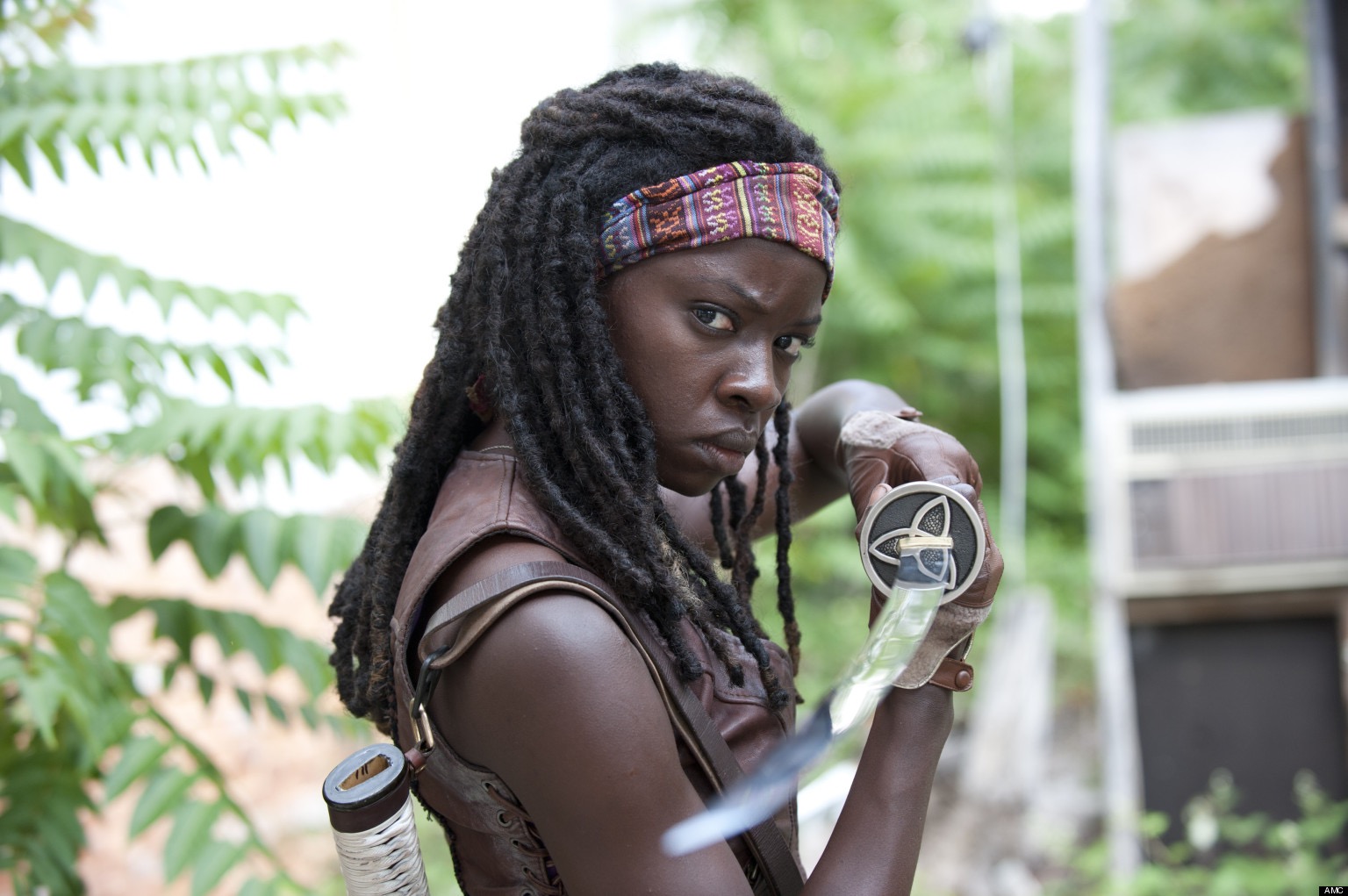 But perhaps, looking at it from my daughter’s viewpoint, I was only re-enforcing the fact that you cannot cosplay over colour lines? Maybe? just a little bit? Poor child. And when we go to comic con, of course the majority of people she sees are white, cosplaying white characters in her mind, so how can she conceive of anything else?

I now see why this hashtag, this movement to be more visible, is so important.

We spent half an hour last night on Instagram looking at photos on the #blackcosplay. Amazing people from all over the world dressing up as all sorts of characters. From Superman to Attack on Titan characters, to Snow white, to Ironman, Samurai Jack, Rogue, there are no limits. Representation matters, and the internet is an amazing place to feel not so alone. We had looked at black cosplayers when it was on in February, but now I see how much more important it is. And I thank whoever created the hashtag and made it something to look for, find and admire.

I had to show her that none of this matters. You can cosplay whoever TF you want. It doesn’t matter if they are green, purple, blue, or indeed black, white or whatever.

I talked to her about her aunt Bibi who is a fantastic cosplayer and who in fact did dress up as She-ra at this year’s Lusaka Comic con and continues to amaze me with her talents and costume creations. 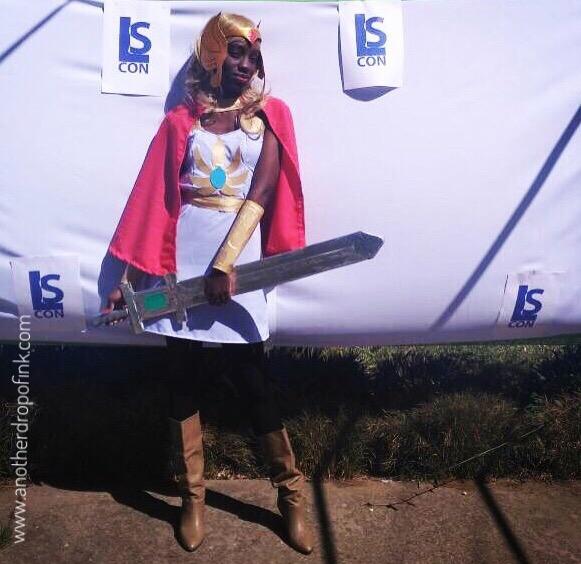 Bibi the talented cosplayer of the family. (Photo credit to her)

I am reminded again, how powerful the gaze is. How important it is that when you live in an environment where you are not the display setting, your children have to see there are other worlds out there, and it is limitless in many ways.

I often don’t write about race here because…I don’t know. I don’t want it to define who I am. But if this is who people see me as. No, who my daughter sees. Who my daughter takes cues from either conscious or unconsciously, then I darn well better get more comfortable with it and working through how I’ll help her find her place.

So next year, I’m so sorry Michonne. I love you but I’ll be going as somebody else. I have two little girls that need me to widen my horizons. 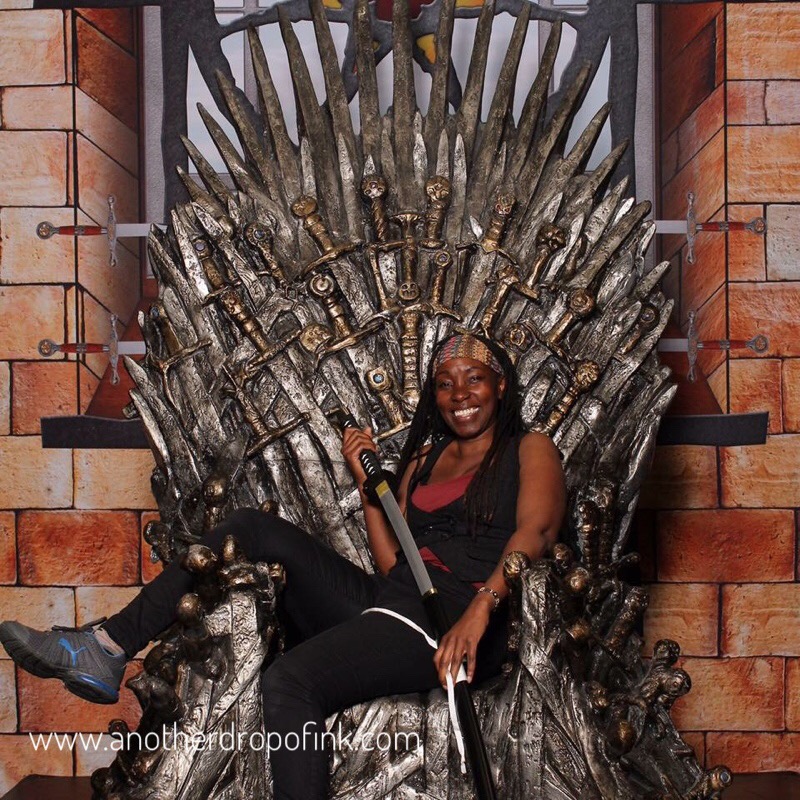 Queen Muuka, first of her name….