Book 1: A book that makes you nostalgic. 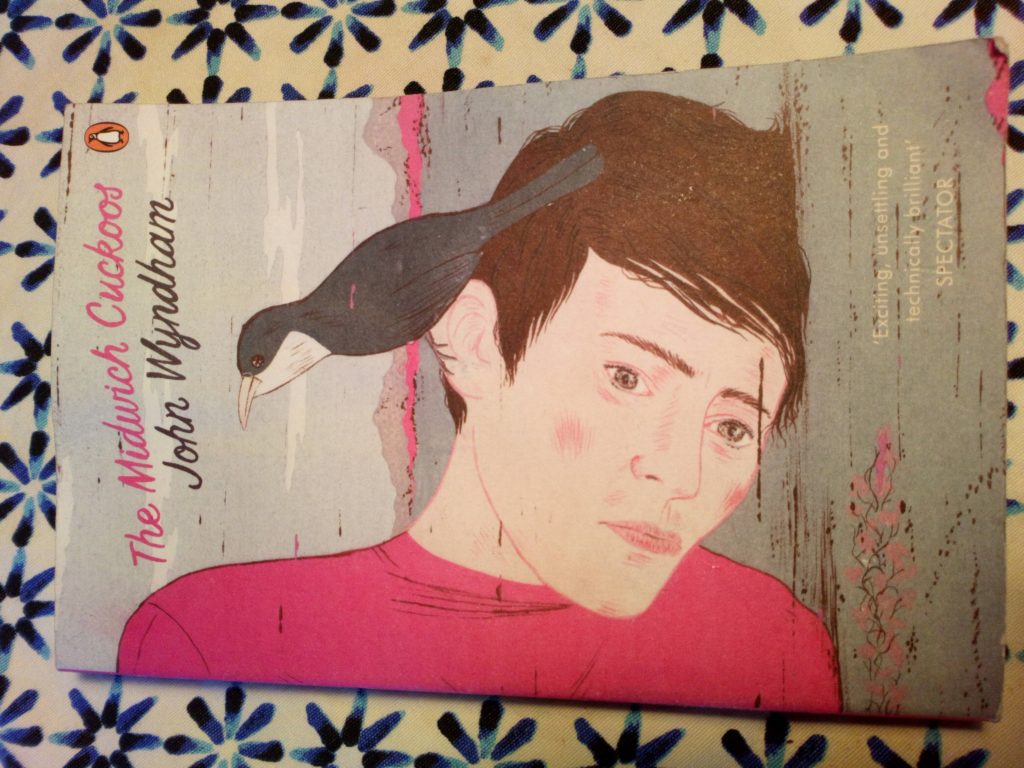 Talk about nostalgia. I remember watching and re–watching the movie based on the book, so many with my sisters. It was called Village of the Damned and starred Christopher Reeves in cringe worthy, wooden performance that made me think it was probably his tall, dark and handsome looks that made him a “good actor” as Superman. I loved it though, it was so cheesy.

I generally like John Wyndham’s writing and remember my teenage mind being blown to pieces by his post-apocalyptic book The Chrysalids, and my poor ten year old self terrified to bits by the miniseries adaptation of his book, The day of The Triffids. Why my parents let me watch that at such a young age, I’ll never know. The past is a different country, but be assured I gave all huge plants a wide berth after that.

It really brought back those days when I had finished by GCSEs, was back home from boarding school, and hadn’t started college yet. I was home for the guts of nine months doing sweet f-all, and it was wonderfully simple in many ways.

There will be spoilers, but I’ll tag them with a start and finish so that if you don’t want to, you don’t have to look at that section. so you can avoid the paragraphs between the >>Spoiler<< section.

Anyhoo, on to the book itself.

Book Blurb: In the sleepy English village of Midwich, a mysterious silver object appears and all the inhabitants fall unconscious. A day later the object is gone and everyone awakens unharmed – except that all the women in the village are discovered to be pregnant.

The resultant children of Midwich do no belong to their parents: all are blond, all are golden-eyed. They grow up too fast and their minds exhibit frightening abilities that give them control over others. This brings them into conflict with the villagers just as a chilling realization dawns on the world outside.

You can tell that this book was written in 1957. The narrator’s use of language brought to mind a man sitting in a manor, resplendent in his black gown with red velvet lining, smoking a pipe as he writes the story at his hundred year old desk that has been in the family for centuries.

You can feel the privilege, condescension, misogyny and navel gazing from page one.

Now that’s not to say it’s a bad book. I actually really enjoyed it once I accepted that it was a book that showed “its time” as people like to put it these days. Of it’s time is usually code for, racist, sexism, transphobic, casual violence etc, take your pick.

The book is written in the first person singular, and the narrator is Richard Gayford. it’s very cleverly done as we only know more, as Richard knows more. The main characters in the book are all men, the charge being led by Gordan Zellaby, a sort of lord of the manor type who goes on and on with theories and observations throughout the book; Bernard Westcott, who is part of the military and put in charge of the whole affair, plus the vicar and the doctor.

The book is fantasy horror….but more psychological horror than anything else. We open with Midwich when, for reasons unknown to the narrator at the time, everyone who was present on the night of the 26th September, goes unconscious. Everyone who tries to get into the village, blacks out. Every animal, bird and reptile, is unconscious. The military swoop in and try to work out what’s going on and to set a perimeter around it, but eventually, everyone wakes up seemingly unharmed. Everything goes back to normal and the inhabitants of the sleepy little town even make up a quirky little name for the event, and try to move on.

Until….it’s then discovered that every fertile woman of child bearing age woman who was unconscious during that time, discovers that they are pregnant. Widowed women, married and unmarried women, gay women, teenage girls…as long as they were fertile, they were pregnant. You can imagine that in 1957, this would be…..a problem. There is denial, fear, social stigma, elation, all the different emotions, depending on what the woman’s social circumstances and marital status was. This isn’t discovered until the number of women falling down the stairs, taking overdoses, being beaten by husbands who weren’t there that night, and virgins confessing to the vicar, lead the men (roll eyes) to conclude that there’s something rotten in the village of Midwich.

I’m kind of struggling to write more without spoiling the book to be honest. But, as the blurb on the back says, all the resultant children are clearly not genetically similar to their parents, and have powers that allow them to control the humans of the villages from a very young age. The powers grow stronger as the children grow, faster than normal humans, and psychically linked to each other. They clearly show signs of being the most dominant creature on this planet, so what are the humans (who will inevitably be replaced, for we are nothing if hard core territorial apes who will stop at nothing to ensure we don’t go the way of the dinosaurs), to do?

The book delves into many themes, what it means to be human, how civilisation has tamed our baser instincts…or not, how religion plays a part in our lives, biology and how it conflicts and ties to, society for women, the military’s role in everyday life, media manipulation, how we deal with difference and most especially, does civilisation mean we can overcome our baser instincts when it’s a fight for survival? It’s a lot of themes for a very small book, and make one think that in a longer book, you’d have so much fun expanding and expounding on each theme.

As I said, the main characters are male, even though this mass violation (we never know if it’s actually rape) has happened to the women. The men rally the troops, the men decide what’s going to happen, the men voice what’s going on, form the committee and make about ninety nine percent of the observations and decisions. This is immensely frustrating, as the men feel they are doing all this for the good of the women and thrust them firmly into the background, as does John Wyndham himself. The few women that do speak of it, state how it felt like they were used, like they were treated as animals by something they will not understand. Something the writer probably didn’t understand or have much experience with either, given it’s 1957.

I wanted to scream. I suppose in a way it really gives you an idea of what the time was like, how women didn’t have a voice even when it came to their own bodies, wants and need.

The fact the book is so short means we don’t really get to delve into characters. The only one who we are allowed to know is Gordon Zellaby, for reasons that become clear in the end. All other characters are pretty one dimensional. We are never given the view of siblings to the children, and the outside world is very neatly packaged away.  It’s intensely class driven as well, in that the only voices are those of the rich and educated. Their ramblings and carry ons was immensely frustrating and I feared my eyes would really roll out my head and only the floor at some stage.

You know what really had me snorting in disbelief? This was Britain 1957. They are talking about the stiff upper lip of the British, about their civility and inability to do what’s necessary because they’re there on their higher moral ground, better than the rest of the rest of us godless heathens basically. Do you know what Britain was doing during this time? India, Northern Ireland, West Indies, various African colonies. Yes, we can all attest to how civil and laid back and reluctant to resort to violence they are. *crumples up book, throws it to ground and stomps on it*

The only reason I enjoyed this book is that it’s a very interesting “what if..” idea for a book. I liked that part of it.

Overall, a good enough read that I would recommend for a read, as long as you leave your post sixties brain firmly at the door.

I bought my books from Chapters, my favourite bookstore in Dublin, but you can get yours by following this affiliate link for bookdepository.com  Should you follow the link and buy a book, I’ll get 5% off the price of my next purchase, so give me some love if you do buy a book from them. They provide free worldwide shipping so that’s an added bonus to their relatively low book prices.