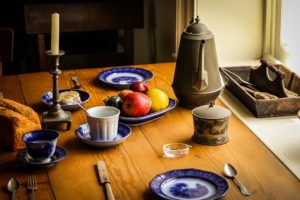 This is the only Tea I’ll recognise.

I’ve lived in Ireland for over 15 years now, which is longer than I’ve lived in the country of my own birth, and yet there are still a lot of things that cause me to scratch my head and just say,

One of these is the concept of “Tea”.

I’m not talking about the drink. I mean the meal.

This never existed before I came to Ireland and I’m not sure now whether it’ll ever make an appearance in my vocabulary.

It all came about with the after school care. We received a pamphlet that stated the children would be given their lunch at two, and their “Tea” at four O’clock.

“Okay’, says I, “That makes sense. It’s the equivalent of ‘four o’clock’ in Zambia.”

When I was growing up, we had breakfast,  a snack at school around ten thirty, lunch at one, four o’clock at…erm…four O’clock, then supper at 6:30. This four O’clock consisted maize meal porridge with groundnuts or if it was available, bread and butter with a cup of tea. Bread wasn’t as readily available due to the communist/socialist/humanist state back in the eighties, but we loved our porridge. It was mostly a small stop gap before supper to make sure the kids didn’t get too hungry, and as you got older you dropped this and left it to the kids.  Well, at least this is how mealtimes were laid out in my parents’ house for my whole life.

I thought “tea” was the same when I got here.

Then I asked the carer at Roz’s school what they gave the kids for tea and she said it was soup and bread. Or sometimes something heavier.

So I have no idea what Tea is.

I looked it up on google and I get endless descriptions of the drink and how it’s an integral part of Irish culture, but no description of this other “tea”.

But this is nothing new. I’ve lived with this ignorance for over a year now and have reconciled the fact that I’ll never know what EXACTLY is meant by the Irish meal called tea.

And then last week, I discovered that Dinner and supper may not be interchangeable here.

Am I the only one who thought dinner was just a posh word for supper?

So I went searching again and happened upon this description at this web address:

Dinner is considered to be the “main” or largest meal of the day. Whether it takes place at noon or in the evening is mostly a cultural thing. For instance, many people who grew up in the American South and/or on farms traditionally ate larger meals at noontime to give them the strength to keep working through the afternoon.

Supper is more specifically a lighter evening meal. Rooted in the word “to sup”, it comes, again, from farming traditions — many farming families would have a pot of soup cooking throughout the day, and would eat it in the evening — specifically, they would “sup” the soup.

O…..kay. So dinner and lunch are interchangeable now? My head is seriously fried. and further down the page they had this to say.

Lunch is almost the midday equivalent of supper — it’s also a lighter and less formal meal than Dinner, but is used specifically when referring to a midday meal. So whether you use lunch/dinner or dinner/supper is heavily determined by when your culture traditionally has its largest meal.

And yes, I’ll admit that my mind is easily blown.

Is this an American/British English thing? And do we have our own Zambian variation? And are the Irish equivalents different?

But seriously, I can never say I had my dinner in the middle of the day. That’s just not happening. It’ll forever remain lunch till the day I die.

Then I asked Roz whether she wanted lunch the other day. At one o’clock. and she said,

“I already had my lunch at school”

So I told her she couldn’t possibly have had lunch at school because it was only lunch time now and I’d just finished cooking the  meal so how could she already have had lunch?

to which she told me,

This gets more confusing and fun by the day.