Why don’t they design clothes for parents?

I was getting ready this morning and noticed that every single tip I had taken off at night over the week and put back in the wardrobe to be worn at a later date ( we all do that right? I’m not alone on this?), had food on it.

It’s the worst thing about weaning at the moment.

Elle (her name isn’t really Elle, her name started with L so might as well) is doing great at the weaning. She flat refuses to be spoon fed so we’ve fallen headlong into baby led weaning. For those who don’t know what baby led weaning is where you let the baby feed themselves entirely. You make sure the food is soft enough for them to gum it, or chew it as their teeth come out, and you give them a variety of different foods and they get to decide what they will or won’t eat and how much of it they will or won’t eat and it’s messy and fun and easy and difficult all at the same time.

Messy because for example Elle will just throw whatever she doesn’t want on the floor. Oh, first she gives it a good squish, then she casually flings it over the side of the highchair. Then she squishes whatever she does want to eat, smears it across the tray and then eats it. And I spend a ridiculous amount of time washing the floor and the high chair and her hands and urgh! 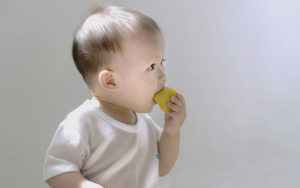 That’s clearly not real food being eaten. Not in a white top. With white walls.

I digress, that’s a rant for another day.

But it’s going well. Despite all the above, I’m enjoying it a lot.

The only thing is the yoghurt. She LOVES yoghurt and eats tons of it. It’s the only thing she kinda sorta lets me feed her. She has to be on my hip while I do this.

And sometimes she grabs the spoon quite forcefully out of my hands and feeds herself whatever doesn’t splash off it and onto the counter, me, her, the cat.

And when she’s really excited about the yoghurt, she puts her hand in her mouth just as I give her a spoonful, scoops it all out and then easy it again. Then reaches over to grab my top.

And when she’s really really excited, she’ll bounce up and down and clamp a yoghurt filled mouth onto my shoulder.

As a result, I’ll need a new wardrobe once this is all over.

So back to my original question, why don’t people make clothes for parents? Remember when I wrote about the holey jeans? Well, I was pointed towards jeans with plastic over the holey knees.

Why doesn’t someone come up with the same concept for parents? It could be normal tops, with a plastic layering over the shoulders or sleeves for grubby hand and mouth grabs. Or trousers with plastic layered fronts so that if you’re sitting down, grubby little hands can grab your trousers and you can just wipe the food off. Or it can be Velcro strips on normal clothing where you can attach these panels at meal times to save your nice clothes.

I would buy those. 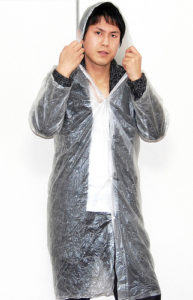 I would totally rock this look at meal times.