The end of the fourth trimester

It’s been great, this last hidden trimester. Getting to know her, watching her go from a small curled up bag of bones and skin to a chubby cuddly little human child.

From curled up fists held tight and close, to these reaching, clasping uncurling hands. From random waving of hands to determinedly pushing her tiny fist to her mouth to suck, suck, suck as teething begins.

From a silent, needing face to this big eyed, gurgling, smiling, kicking baby that we’ve all grown to adore.

So easy with her smiles, just learning to bubble up with laughter; turning to follow our movements in the room; protesting when left in her bouncer even for a moment. We adore her. She’s such an easy baby, enduring the overenthusiastic hugs and kisses of her big sister; sitting patiently while her dad sings to her on the guitar, staring calmly as she bounces away in her seat while I take a shower…

Before she was born, I declared how much I would embrace my primate side.

Did you know that when held in captivity, it can take the careers months to determine the gender of a baby gorilla because the mother holds them so close? She never puts her baby down; eating, socialising and sleeping with the infant for weeks on end until the little one can toddle along beside her at arm’s length. How adorable is that?

We humans are at heart, primates. So I decided to take a leaf out of their book. As soon as my scar had healed ( finally, six weeks after the caesarean) I had her in the stretchy wrap to get things done. I love how stretchies allow you to move so freely with the baby tucked in close. I have a sleepy wrap, which was then bought out by Boba a few years ago and rebranded as their Boba Wrap. 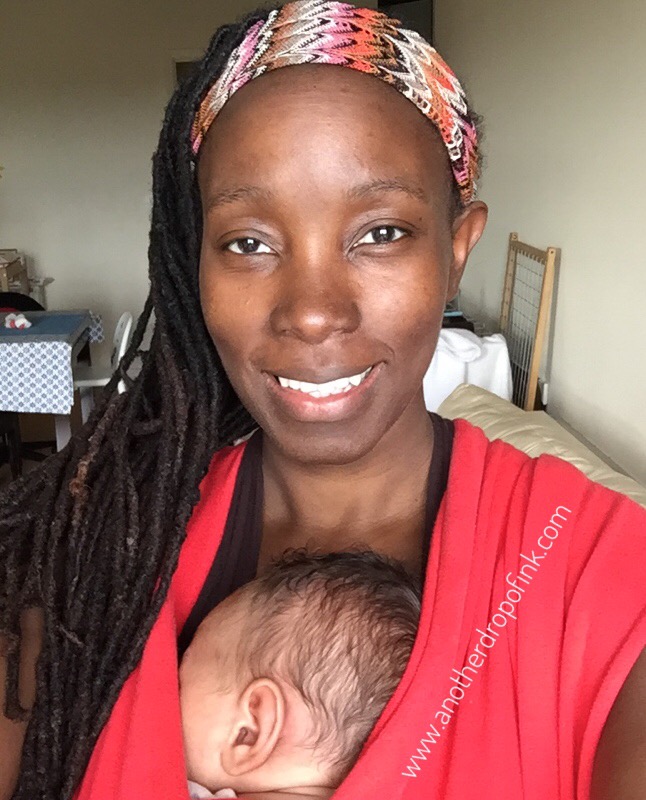 Into the stretchy wrap for some work around the house

She’s a bit bigger at the moment so I can swap between the stretchy and the buckle carrier, which Kris also carries her in now. I still have both from when I carried Roz and it’s been, actually both are complete life savers.I also have a beautiful Red and black traditional Chitenge but I can’t use that until she’s able to hold her head up confidently. Can’t wait! It’s beautiful. And I didn’t use it with Roz, so it’ll be her very own carrier.

So some might ask why is it called the fourth trimester, and why am I insisting on carrying her around, instead of buying a pram like a normal human being. Because, as I said above, we’re primates. primates all carry their young. Who am I to argue with evolution? This is what we’ve ended up being able to do. Humans are really special. To compensate for this big brain that we have, that makes us very special, we’re basically born premature.

We’re one of the very few creatures on earth that are completely and utterly hopeless for the first few years of our lives. We can’t fend for ourselves, walk, run, or even grasp objects, for weeks. But if we were born with our brain at the size needed for us to do all the above, all our mothers would die during childbirth. The brain would just too big to be born. So like kangaroos, our babies are born smaller and less developed, and the hidden fourth trimester is a chance for us to hold them close, nourish them and envelope them with love and care. With a carrier, I can do this, and get some work done with my babies that refuse to sleep away from me.

And I LOVE smelling the tops of their gorgeous little heads. 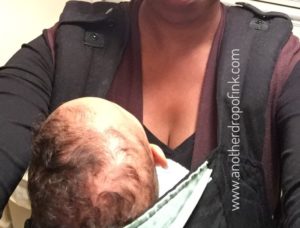 And into the buckle carrier for even more work…

I went to pick up Roz from school the other day, carrying the baby in the stretchy and a few of the kids gathered round to see what she looked like. She was fast asleep in it and they all peered and cooed when one of them said,

I love the unbridled honestly of children.

And you know what, that was exactly what it’s meant to be like for both the baby and me.

If you want to try out baby wearing, babywearing Ireland is a great source of information, and also have a sling library to try out a sling before you commit to buying one.